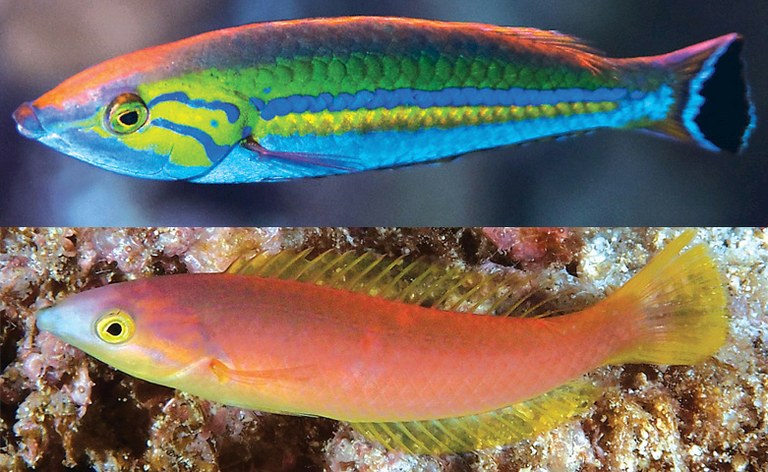 Pseudojuloides cerasinus was once considered a wide-ranging pan-Indo-Pacific species distributed from South Africa to the Hawaiian Island.  Now after genetic analysis as well as comparing differences in male-display color patterns, a new Journal of Ocean Science Foundation paper has concluded this pencil wrasse is actually three distinct species with distinct natural ranges.

The originally-described  P. cerasinus is now regarded as an Hawaiian endemic.

Pseudojuloides splendens (pictured above) “occurs widely in the tropical and sub-tropical western Pacific Ocean region, mostly associated with offshore coral-reef areas in relatively deep-water habitats over rubble bottoms. The species extends into southern Japan in the north, to New South Wales in Australia in the south, and in the W. Pacific island chains ranging from Maug Island in the Northern Mariana Islands south to Lord Howe Island, and eastward to Kwajalein Atoll in the north Pacific and to Samoa in the south Pacific.”

Pseudojuloides polynesica (pictured below) “occurs in French Polynesia (but not Marquesas Islands), at Tahiti, Moorea, and Rangiroa in the Tuamotu Archipelago, as well as ranging south to the Austral Islands, west to the Cook Islands […] and north to the Line Islands, at Kiritimati Atoll.”