The two new gobies are described in the Journal of the Ocean Science Foundation.

The new species is currently known only from the type specimens collected at Miniloc Island, near El Nido on northern Palawan, Philippines. The species likely ranges widely in the East Indian region and western Pacific Ocean. The habitat consists of silt-mud substratum in highly sheltered bays and lagoons at depths from about 10–20 m. Loosely scattered, mainly solitary individuals were encountered at the type locality. The fish were invariably associated with muddy burrows into which they retreated when closely approached by divers.

The new species is currently known from the type specimens collected at Alotau in Milne Bay Province of Papua New Guinea, and also on the basis of photographs from the Ryukyu Islands of Japan, the islands of Bali and Flores in Indonesia, and Yap in Micronesia. It probably ranges widely in the East Indian region, but has been either overlooked due to its seldom-dived habitat or has been confused with the similar A. nocturnus. The preferred habitat consists of soft mud substratum, sometimes near freshwater-stream mouths, at depths between about 2–12 m. Occasional solitary individuals and pairs were encountered at the type locality. The fish were invariably associated with a muddy burrow, into which they retreated when approached at close range. 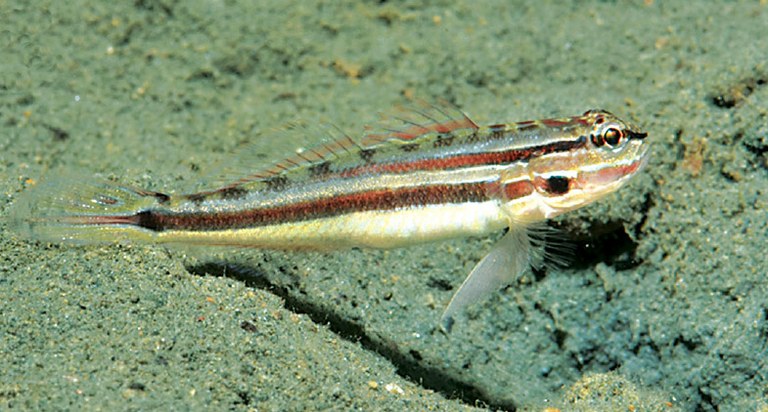