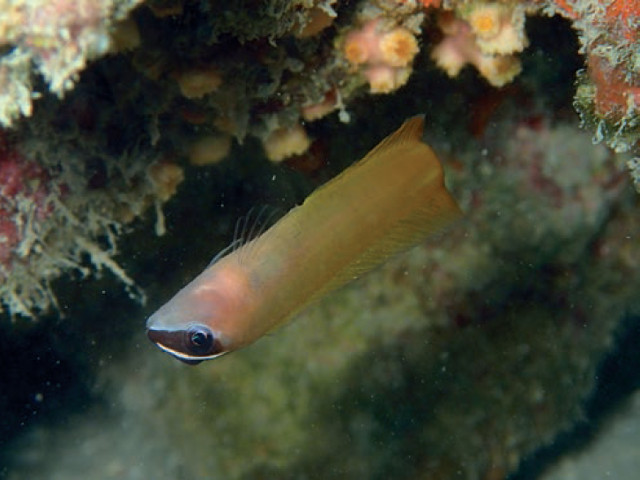 The Tribe Omobranchini is a small group (7 genera, 36 species) of shallow-water, carnivorous blennies with a relatively small presence in the aquarium hobby. Species tend to be drably colored, small in size and found near estuaries on rocky or shelly substrates. Only a couple species—the Brachiosaurus Blenny Omobranchus anolis and the Yellowfin Blenny Enchelyurus flavipes—are offered with any regularity, but there is a great deal more biodiversity waiting to be discovered by aquarists. 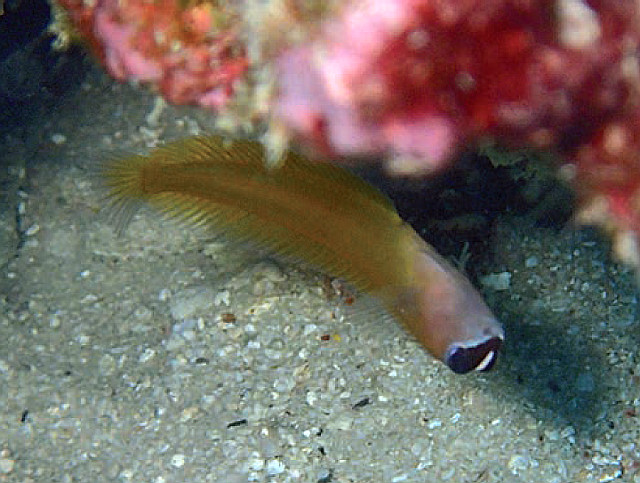 One of the most seldom seen members in the family has been Oman ypsilon, a fish known up until recently from only a few reefs along the southern coastline of Oman. Relative to other omophorine blennies, this small species (max size: 4cm) is rather attractively colored. The body is a subdued shade of yellow, blending into a peach-colored chest; the face is a dark brown and divided by a white line, forming the namesake y-shaped marking which contrasts sharply against the lightly colored body.

The photographs included here, taken in Kuwait, are perhaps the only in existence showing O. ypsilon in its natural habitat, where it is said to adopt the unusual habit of swimming upside-down inside caves. This peculiar dottyback-like behavior is quite aberrant in the family, as blennies are generally not such cryptic and cavernicolous creatures. Quite a shame that this species isn’t more widespread, as it would undoubtedly make for a fascinating addition to a small reef aquarium.

Another obscure omobranchine blenny worth taking a look at is the Japanese-endemic Laiphognathus longispinis. This small (max size: 4.5cm) species is generally found in the shallow waters of sheltered lagoons and inshore reefs and can be identified by its attractive patterning of small red spots on a white body. The dorsal fin possesses a few extended filaments, which serves to separate it from the only other species in this genus, the widespread Indo-Pacific L. multimaculatus. These two are readily separated from other omobranchine genera by the presence of a pair of prominent protuberances (termed “cirri”) above the nostrils, as in the many combtooth blennies familiar to aquarists.

It’s a shame that Laiphognathus is unavailable in the aquarium hobby, as its small size and complex color pattern would make this another fine choice for all the nanoreefs out there. Unlike with Oman ypsilon, there’s no obvious reason for why this species has been so ignored, as it occurs throughout the aquarium collecting regions of the world, residing in shallow waters near to shore. While these pretty little blennies may never help remove algae from a reef tank, they are not without their charm and certainly deserving of a place in this hobby. Now if only someone would be so kind as to start collecting them…