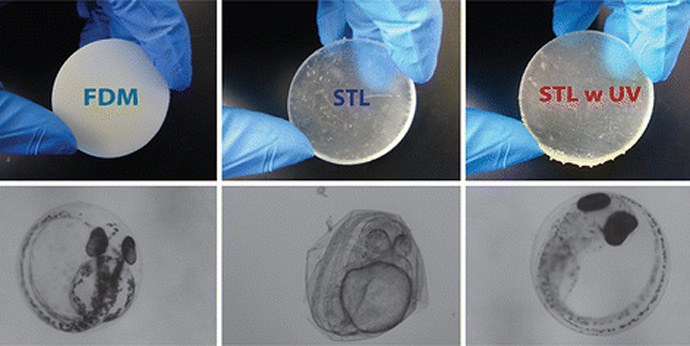 
3D printing is an increasingly popular method of producing custom parts for a wide range of applications.  This technology has been utilized by aquarists to print objects such as frag plugs to replacement/modified pump parts.

However, a new research should make us pause and rethink the safety of 3D printing.

Researchers at the University of California at Riverside placed zebrafish embryos on disks created from the two main techniques used in 3D printing: stereolithography (STL) and fused deposition modeling (FDM).  The results are alarming.

Embryos exposed to both types of 3D printing techniques were severely harmed.  While both resulted in mortalities and deformities, FDM-printed plastic was found to be significantly less toxic than stereolithography.  In fact, embryos placed on STL disks had almost a 100% mortality rate, with the few that survived all developing grotesques deformities.

Stereolithography is a 3D printing technique in which plastic is built up by layering resins that harder when exposed to light.  The researchers hypothesized that the resins had not fully cured and may be leeching toxic chemicals that harm the fish, so to test this theory, they irradiated STL disks to UV light in an attempt to further cure the resins.  Sure enough, disks exposed to UV light were found to be much less toxic, although mortalities and deformities still occurred (at a much lower rate).

In light of these findings, we may want to reevaluate the safety of using 3D printing in aquariums.  Further curing of 3D printing objects with UV light (or sunlight) may alleviate any toxic leeching.