We finally have video for one of the rarest wrasses of the Indo-Pacific, a species only discovered in the last decade and which has yet to be collected for the aquarium trade—the Nursalim Flasherwrasse (Parachelinus nursalim).

With a range that includes only Ambon, Triton Bay and the Raja Ampats (all in Indonesia), it’s no small wonder why this fish has failed to become a household name. None of these are regions which see much, if any, aquarium collection, and recreational diving is a relatively recent phenomenon here, hence this fish’s continued obscurity. 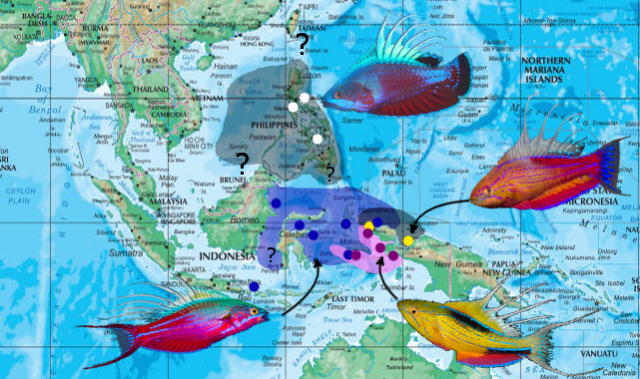 It’s closest relatives are also somewhat obscure. The Blue Flasherwrasse (P. cyaneus) is a similar fish found further west at Sulawesi, while Walton’s Flasherwrasse (P. waltoni) occurs just to the north, at the Raja Ampats and east to Cenderawasih Bay. The former is frequently collected at Sulawesi for the aquarium trade , while the latter is entirely unavailable, being arguably even more rarely encountered than P. nursalim. These three form a closely related species group, limited to the heart of the Coral Triangle and sister to the Filamented Flasherwrasse (P. filamentosus) and its soon to be described variants.

All of these are recognizable by the numerous extensions of the dorsal fin and the highly lunate caudal fin, but it’s only in P. nursalim that we see the elongate black bars dorsally and ventrally which instantly set it apart. These, however, are only obvious in “flashing” males, and specimens observed just in their resting coloration will be challenging to identify. Further complicating matters is the extensive hybridization these fishes are prone to, as nursalim, waltoni and cyaneus can all be found within close proximity of each other in regions like the Raja Ampats. 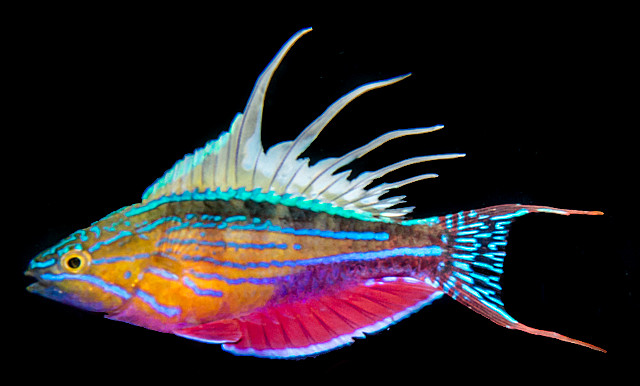 This species group has an unusually compact range in the Coral Triangle, perhaps most analagous to what we observe in the Cirrhilabrus solorensis group. In both of these, species boundaries seem nebulous, and it’s likely that all these wrasses are representative of very recently diverged clades. The reefs of West Papua and the Maluku Islands are one of the most singularly fascinating regions with regards to speciation, representing a crossroads where lineages converge and diverge—a veritable crucible of species creation. There are some fascinating evolutionary riddles hiding here, which I’ll be expounding upon in entirely too much detail with my forthcoming review of the genus next year.

Update: thanks to LemonTYK, who points out that there is an earlier video…