Pseudanthias heemstrai is, by any metric, one of the most singularly confounding species of anthias in the Indo-Pacific. Since being discovered in the 1980’s, the species has remained virtually unstudied by ichthyologists. Despite residing in some of the most visited reefs in the world, this fish is almost never photographed in the wild, and, to the best of my knowledge, it has yet to ever be exported for the aquarium trade. It is a truly enigmatic fish, and, adding to its many mysteries, the Orangehead Anthias possesses a unique mix of morphological traits that makes deciphering its evolutionary relationships immensely challenging. 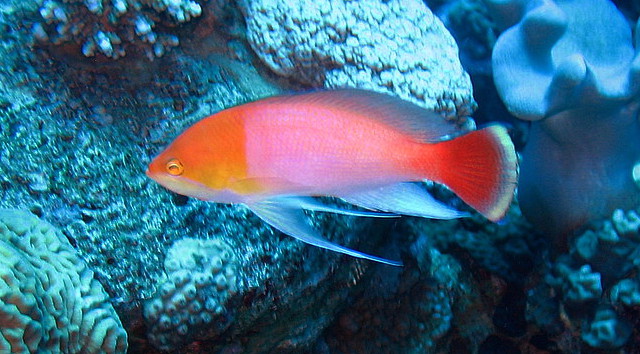 Only a handful of records exist of P. heemstrai, and all are from within the Red Sea. It was first stumbled upon at Dahab, on the Sinai Peninsula, in the 1970’s by none other than John Randall, who encountered this elusive creature skulking about in large harems at mesophotic depths below 50 meters. The next documented encounter was nearby at Aqaba, where it turned up in shallower waters (14-30 meters) near a marine research center and from where it was ultimately described—the name honors the prolific anthias researcher Phillip Heemstra. Since then, it has been recorded at the southern end of the Red Sea at the Kamaran Islands of Yemen and, more recently, at Ghoubbet-el-Kharab, Djibouti at 30 meters by Luiz Rocha. It might also be expected to occur in nearby areas of the Gulf of Aden and Socotra, but, in essence, this is a Red Sea endemic. 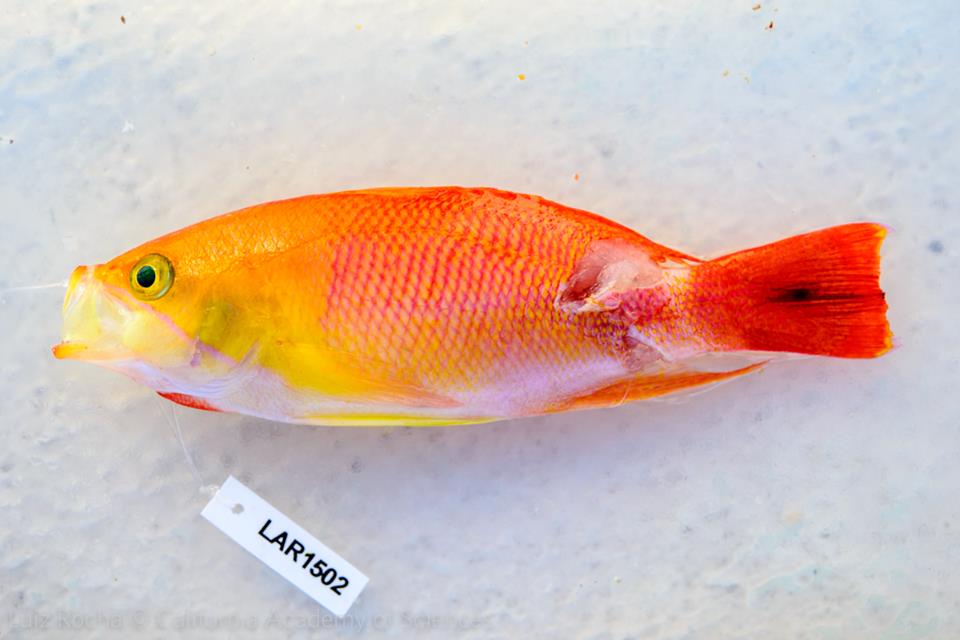 The question that next arises is whom, pray tell, this gorgeous species is most closely related to within its highly diverse genus. As it turns out, dear reader, this is a tricky thing to answer with any confidence. Pseudanthias are a surprisingly homogenous lot when it comes to morphology, and the genus as a whole has yet to receive the sort of serious study necessary to properly understand its evolutionary origins. In fact, it’s not even certain that our current classification for this group is entirely accurate, as it’s quite possible (nay, likely) that at some point it may be split up into smaller genera or have additional species included within it. 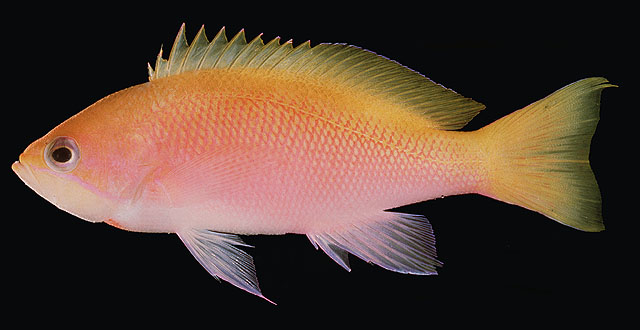 As with its congeners, P. heemstrai shows some considerable differences between the sexes. Females are a mostly pink-hued affair, with a bright yellow coloration across the dorsal fin, along the back and into the truncate caudal fin. At first glance, this appears to be quite similar to the yellow-and-pink females of P. bimaculatus—an Indian Ocean species absent the Red Sea; however, males of these two taxa differ dramatically in appearance, making it unlikely that the two are close relatives.

Males of P. heemstrai sport a far more dramatic appearance than the females, having a pale pinkish body which gradually darkens dorsally, a deeply reddened caudal fin that is margined posteriorly in a creamy shade of white, and an orange coloration across the forebody, which gives rise to the common name. Dramatically, the pelvic fins are greatly elongated relative to anything else in the genus, trailing below the body in a manner not unlike a freshwater angelfish. When aroused in a pique of piscine passion, the male’s body darkens into a nuptial coloration that becomes orange throughout, with a shiny lavender stripe emerging along the midbody and a crimson band forming along the posterior margin of the caudal fin. They are, in a word, really quite nice to look at.

So who is this fish related to? One possibility put forth by the original authors of the species was the Pink or Stocky Anthias (P. hypselosoma), which occurs from the Maldives east to Japan and Samoa. The two do look a bit similar in their male sex, having pale bodies, a dark, somewhat truncate caudal fin and a diffuse coloration covering the head, but females of the two are strikingly different. In P. hypselosoma, we find a motif common to several seemingly related species—a pink body with red tips on the caudal fin. This same female phenotype occurs in the related P. rubrizonatus and P. marcia of the Indo-Pacific, as well as the P. taeniatus+P. townsendi+P. connelli clade of the Western Indian Ocean. Other species groups with similar red-tipped females include the P. cooperi clade, the P. caudalis+P. thompsoni clade and P. bicolor… all of which are likely to together comprise a major branch within Pseudanthias.

If we assume for a moment that the lack of red caudal fin tips excludes P. heemstrai from this major anthias group, then we must next look elsewhere in the genus to find its nearest relative. The P. lunulatus group shows some similarities, particularly when it comes to the shiny lavender caudal peduncle of the males, but, tellingly, P. lunulatus itself is known sympatrically from the Red Sea. And there are several major phenotypic traits that argue against a relationship, such as the blue margins on the caudal fin, the relatively short pelvic fins, and the medial blotch seen in all members of the lunulatus group. Eliminating that group from contention, there really aren’t many other viable options in the genus that are truly comparable in biogeography and morphology. This is the enduring mystery of the Orangehead Anthias… it seems as though it is a phylogenetic orphan within Pseudanthias. 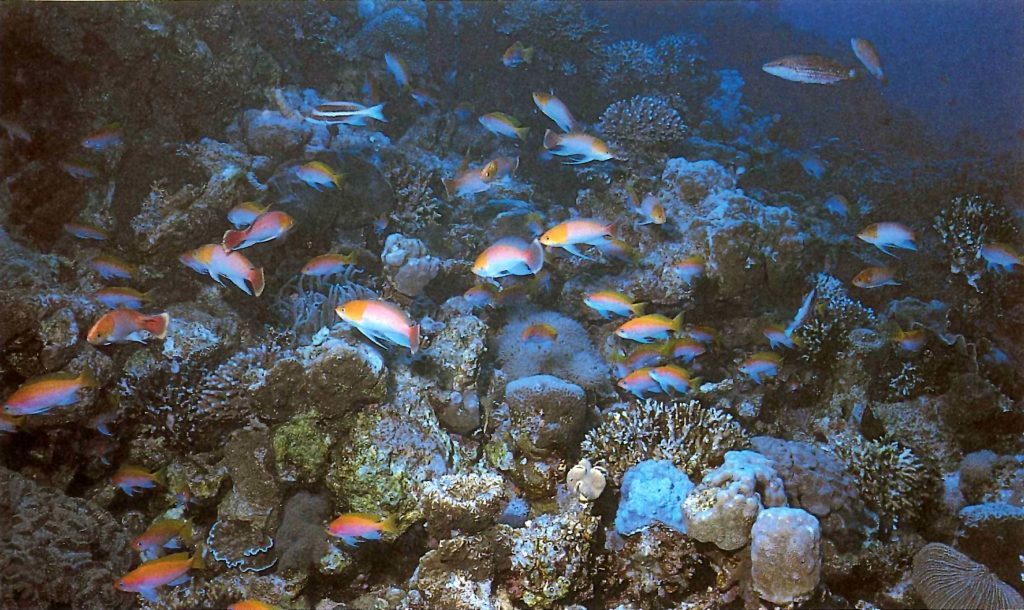 But I can’t very well write all of this heady verbiage without at least proffering some slight semblance of a hypothesis. One interesting trait which I have thus far ignored is the presence of a red marking on the throat of P. heemstrai. An identical marking can be found elsewhere in the genus among most members of the previously discussed clade comprised of those red-tipped females. And so we find a red throat in P. rubrizonatus and P. cooperi and P. taeniatus and P. hypselosoma. For various reasons (morphology, coloration, biogeography), none of these species seem to be particularly close relatives of Heemstra’s inscrutable anthias, but, as a whole, perhaps this entire clade is? This would put Pseudanthias heemstrai in a unique and important position within the genus, having diverged early on from one of the major branches of anthias biodiversity and existing today as a sort of evolutionary relic.