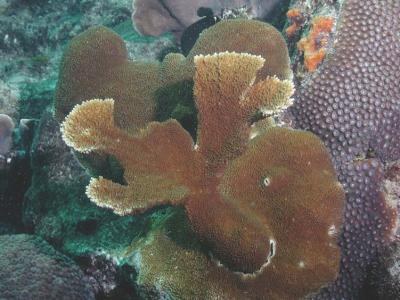 This is modern elkhorn coral (Acropora palmata). Credit: James Klaus, assistant professor in the Department of Geological Sciences at the University of Miami College of Arts and Science


One of the greatest mysteries of modern coral reefs is how they evolved from ancient corals. A critical knowledge gap has long existed in the record of coral evolution. This evolutionary gap occurs during a period of dramatic fluctuations in sea level and changes in the Earth’s climate between 1 and 2 million years ago. During this period many “old” corals went extinct, and the modern reef corals emerged. To fill this key temporal gap and understand the evolutionary and ecological transition to modern Caribbean reefs, the U.S. National Science Foundation (NSF) has funded a University of Miami (UM) project to study corals along the southern coast of the Dominican Republic. It is one of the few areas that contain a record of coral reefs from this period of climatic change.

“Our preliminary fieldwork has indicated that the Dominican Republic contains rocks that bridge this critical reef evolution gap,” said James Klaus, lead investigator and assistant professor in the Department of Geological Sciences, at the UM College of Arts and Sciences. “The Dominican Republic is a valuable site because it was submerged for a long period of time, and has now been uplifted to make the coral-rich deposits accessible.”

This is modern staghorn coral – Acropora cervicornis.  Credit: James Klaus, assistant professor in the Department of Geological Sciences at the University of Miami College of Arts and Science

The NSF grant is $250,000 for two years. During that time, the team will work to pinpoint the evolutionary transition from the now extinct coral Stylophora, to modern reefs dominated by the genus Acropora (staghorn and elkhorn corals) and evaluate how reef ecosystems respond to climate change.

“These corals work in concert to construct the reef edifice, and just below the living surface form the underlying limestone rock,” says co-investigator Ali Pourmand, assistant professor in the Division of Marine Geology & Geophysics, at the UM Rosenstiel School of Marine and Atmospheric Science. “To geologists and paleontologists, these limestones represent just the latest growth, and what lies beneath may provide clues to both the past and future of coral reefs.”

Fundamental to the study is the ability to tell the ages of the corals. To help with this age assessment, the team will utilize a recently established geochemical laboratory that couples a laser sampling device and mass spectrometer to produce high-precision age dates of the corals.

“Being able to tell time in these rocks is our biggest challenge,” says Donald McNeill, co-investigator of the project and senior scientist in the Division of Marine Geology and Geophysics, at the Rosenstiel School. “We need to put the evolutionary changes in a time context to link them with sea level and climate changes that were happening both locally and globally.”

The research team will develop an integrated model of coral reef development for the critical time gap that includes the controlling factors of climate change, sea level, tectonics, and the maximum growth rate of dominant reef builders. The findings will provide a valuable record of tropical climates and the growth of coral reefs.

This is extinct monticle coral (Stylophora monticulosa) (approximately 2 million years old), found on the southern coast of the Dominican Republic.  Credit: James Klaus, assistant professor in the Department of Geological Sciences at the University of Miami College of Arts and Science