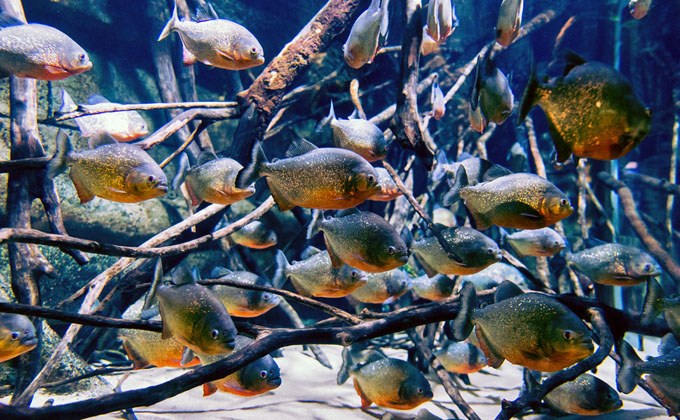 In the plea agreement, Rakower admitted that his company purchased piranhas from a Hong Kong tropical fish supplier and imported them to Queens, N.Y.   Each such import must be accompanied by a packing list describing what wildlife is contained in the package being imported, and the importer must provide this packing list to the United States Fish and Wildlife Service upon import for inspection.   In March of 2011, shortly after New York City prohibited possession of piranhas, Rakower instructed the foreign supplier to falsely label the piranhas on packing lists as silver tetras, a common and unaggressive aquarium fish.   Over the course of 2011 and 2012, Transship submitted packing lists to the Fish and Wildlife Service containing false identifications of 39,548 piranhas, worth approximately $37,376, which Transship then sold to fish retailers in several states.

“Rakower flouted federal laws meant to protect people and the environment from the illegal trade in wildlife species,” said Acting Assistant Attorney General Dreher.  “Mislabeling imported wildlife presents dangers to the public and the environment and we will continue to prosecute these cases.”

Under the plea agreements, Rakower agreed to pay a $3,000 fine.   Transship agreed to  serve a two-year period of probation, pay a $35,000 fine and pay $35,000 in restitution to the State of New York’s Department of Environmental Conservation Division of Law Enforcement.  Both parties will be sentenced on April 24, 2014.

Piranhas are freshwater fish originating from South American rivers such as the Amazon, Orinoco, Guyana and the Sao Francisco river systems.  Piranhas are extremely aggressive and territorial, feeding on insects, fish, and larger prey such as amphibians, reptiles and mammals.  As a result of piranhas’ aggressiveness, 25 states have either banned or regulated piranhas, making them illegal to own or sell.  Piranhas, an injurious species, could pose a serious risk if they escaped into native water systems, potentially damaging ecosystems through aggressive predation or injuring people or pets.  Tropical fish enthusiasts can contribute to this possibility by releasing piranhas into the wild when they grow too large for a tank.  Although piranhas originate from tropical waters, they are able to withstand much cooler water temperatures, creating fear that they may even become established in more northern US waters.   Effective regulation of piranha possession and sales within the United States depends on accurate reporting of piranha imports; concealing the fish upon import facilitates their entry into the black market in states that have banned or strictly regulated piranhas to protect state waters and ecosystems.

“Driven by greed and without regard for the health and safety of people or the environment, the defendant and his company illegally trafficked in piranha by falsely labeling the imported predatory freshwater fish as being silver tetras, a far more benign fish often kept in home aquariums and having a far less street value than piranha,” said District Attorney Brown.  “I thank the New York State Department of Environmental Conservation and our federal colleagues – the U.S. Fish and Wildlife Service and the United States Department of Justice’s Environment and Natural Resources Division – for providing a reasonable and appropriate resolution of the case.”

This case was investigated by the United States Fish and Wildlife Service in conjunction with the New York State Department of Environmental Conservation Division of Law Enforcement, and is being prosecuted by Cassandra Barnum, a trial attorney in the Environmental Crimes Section of the U.S. Department of Justice’s Environment and Natural Resources Division.