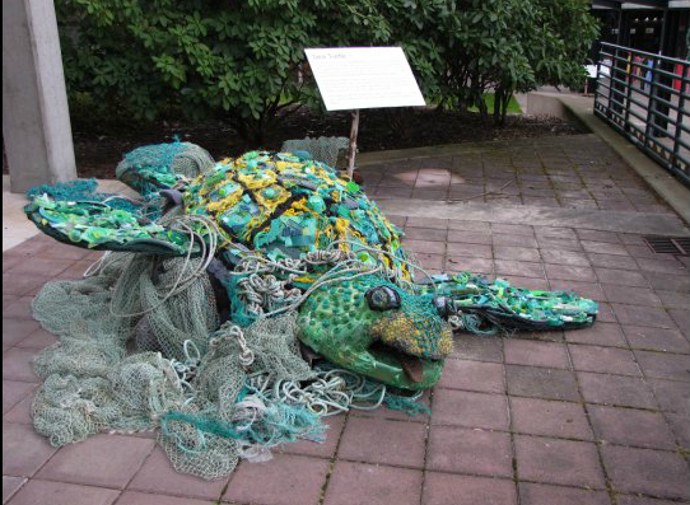 Based out of Chula Vista, California, The Washed Ashore Project features enormous sculptures created out of marine debris such as rope, plastic bottles, toys, shoes, trash cans, bottle caps and more. The individual sculptures range from gigantic sea turtles, a styrofoam coral reef, Henry the Fish, a musical sea star, and plastic bottle jellyfish. In addition to the sculptures, a feature-length documentary is planned to augment the existing work.

Lead artist Angela Haseltine Pozzi began the project because “in the last 10 years I have seen the pristine Oregon beaches of my childhood become cluttered with plastic pollution. My response to this reality has been through mixed media sculptures. I now see the essential purpose of my work is not only to create strong aesthetically sound sculptures, but also to bring awareness and dialogue about the oceans’ environmental issues. I believe the power of the arts can carry urgent messages forward into the public eye.”

The art exhibit is on display at the Chula Vista Nature Center until September 3, 2012 and then they will begin their worldwide tour.