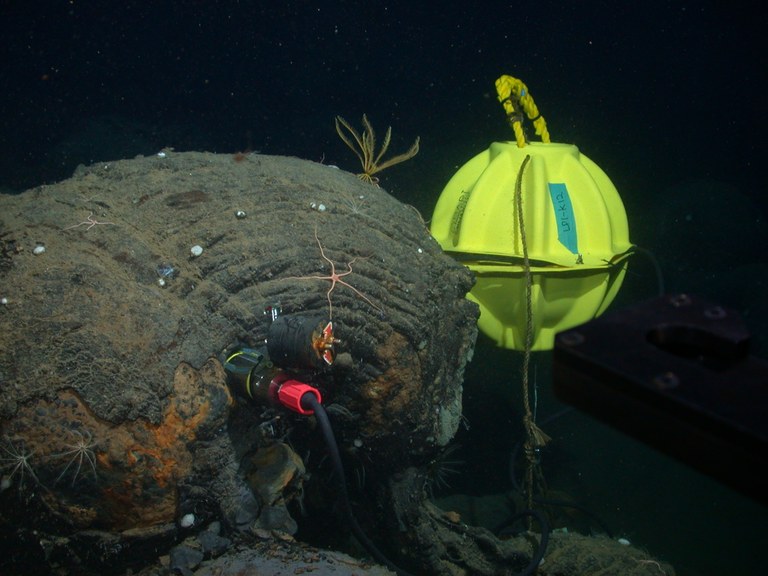 A seismometer inserted into a hole drilled in seafloor lava. A data recording device is enclosed in the yellow sphere. In three years of operation the network detected nearly 40,000 small earthquakes, and hundreds of thousands of fin-whale calls.


A carcass that washed up on a Seattle-area beach this spring provided a reminder that sleek fin whales, nicknamed “greyhounds of the sea,” are vulnerable to collision when they strike fast-moving ships. Knowing their swimming behaviors could help vessels avoid the animals. Understanding where and what they eat could also help support the fin whale’s slowly rebounding populations.

University of Washington oceanographers are addressing such questions using a growing number of seafloor seismometers, devices that record vibrations. A series of three papers published this winter in the Journal of the Acoustical Society of America interprets whale calls found in earthquake sensor data, an inexpensive and non-invasive way to monitor the whales. The studies are the first to match whale calls with fine-scale swimming behavior, providing new hints at the animals’ movement and communication patterns.

The research began a decade ago as a project to monitor tremors on the Juan de Fuca Ridge, a seismically active zone more than a mile deep off the Washington coast. That was the first time UW researchers had collected an entire year’s worth of seafloor seismic data.

“Over the winter months we recorded a lot of earthquakes, but we also had an awful lot of fin-whale calls,” said principal investigator William Wilcock, a UW professor of oceanography. At first the fin whale calls, which at 17 to 35 vibrations per second overlap with the seismic data, “were kind of just a nuisance,” he said.

In 2008 Wilcock got funding from the Office of Naval Research to study the previously discarded whale calls.

Dax Soule, a UW doctoral student in oceanography, compared the calls recorded by eight different seismometers. Previous studies have done this for just two or three animals at a time, but the UW group automated the work to analyze more than 300,000 whale calls.

The method is similar to how a smartphone’s GPS measures a person’s location by comparing paths to different satellites. Researchers looked at the fin whale’s call at the eight seismometers to calculate a position. That technique let them follow the animal’s path through the instrument grid and within 10 miles of its boundaries.

Soule created 154 individual fin whale paths and discovered three categories of vocalizing whales that swam south in winter and early spring of 2003. He also found a category of rogue whales that traveled north in the early fall, moving faster than the other groups while emitting a slightly higher-pitched call.

“One idea is that these are juvenile males that don’t have any reason to head south for the breeding season,” Soule said. “We can’t say for sure because so little is known about fin whales. To give you an idea, people don’t even know how or why they make their sound.”

The fin whale’s call is not melodic, but that’s a plus for this approach. The second-long chirp emitted roughly every 25 seconds is consistently loud and at the lower threshold of human hearing, so within range of earthquake monitoring instruments. These loud, repetitive bleeps are ideally suited for computer analysis.

Michelle Weirathmueller, a UW doctoral student in oceanography, used Soule’s triangulations to determine the loudness of the call. She found the fin whale’s call is surprisingly consistent at 190 decibels, which translates to 130 decibels in air – about as loud as a jet engine.

Knowing the consistent amplitude of the fin whale’s song will help Weirathmueller track whales with more widely spaced seismometer networks, in which a call is recorded by only one instrument at a time. Those include the neptune Canada project, the U.S. cabled observatory component of the Ocean Observatories Initiative, and the huge 70-seismometer Cascadia Initiative array that’s begun to detect tremors off the Pacific Northwest coast.

“We’d like to know where the fin whales are at any given time and how their presence might be linked to food availability, ocean conditions and seafloor geology,” Weirathmueller said. “This is an incredibly rich dataset that can start to pull together the information we need to link the fin whales with their deep-ocean environments.”