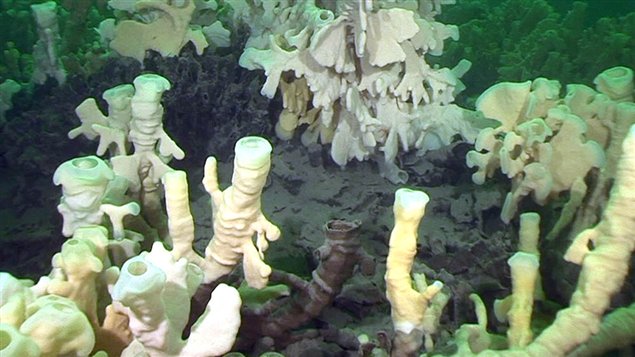 While employed at the Vancouver Aquarium,  I had the great honor of working under Dr.
Jeffrey Marliave for seven years. Dr. Marliave is the Vice President of the aquarium and has been with the Vancouver Aquarium for over thirty years. I looked up to Dr. Marliave as a mentor, and have the utmost respect for him. Additionally, having seen the glass sponge reefs myself, I can honestly say that they are truly amazing. The Vancouver Aquarium has recently received federal funding so that the aquarium can study the glass sponge reefs. Warm waters from El Nino has caused many of the sponges to die. These sponge reef’s are the only living examples of the reefs that were in existence during the Jurassic period. The glass sponge reefs in British Columbia have literally been around since the time of dinosaurs, and are alive for us to study! That is pretty incredible. “The look like cumulus clouds, they’re just so beautiful, and you’re down there you’re just swept away by the beauty of it,” said Vancouver Aquarium marine science vice-president Dr. Jeff Marliave. In the past 15 years, the reefs have been discovered in Howe Sound, and are currently only found in British Columbia. MORE