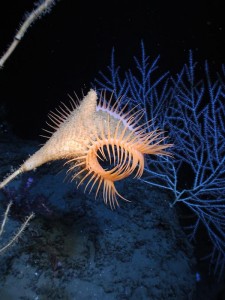 This beautiful creature is the Venus Flytrap Anemone, Actinoscyphia aurelia. This anemone can grow up to 12 inches (30.5cm) in length and girth, but the size that it grows to depends largely on the amount of food available. While its body are stick-like in shape, its mouth is rather large and wide, and resembles the plant that it is named after. And, while the flytrap anemone feeds with nematocysts on outstretched tentacles, it does perform the characteristic venus-flytrap-motion as a defensive tactic, further strengthening the resemblance to the plant look-alike.

The Venus Flytrap Anemone is a benthic species, which means that it lives in the lowest levels of the bodies of water where it is found, including the sediment surface; it seems to prefer muddy areas. It is found at depths ranging between 1,500-5,000 ft (457-1,524 m), but the majority of the population is found at a depth of approximately 3,000 ft (914 m). At this depth the prevailing currents are comparatively mild. The species is endemic to two specific regions of the Atlantic Ocean – deep water canyons in the Gulf of Mexico, and the western coast of Africa. It appears to prefer to congregate on or near the continental shelf.

The members of this fascinating species are detritivores, which means that they feed on dead or decomposing matter.