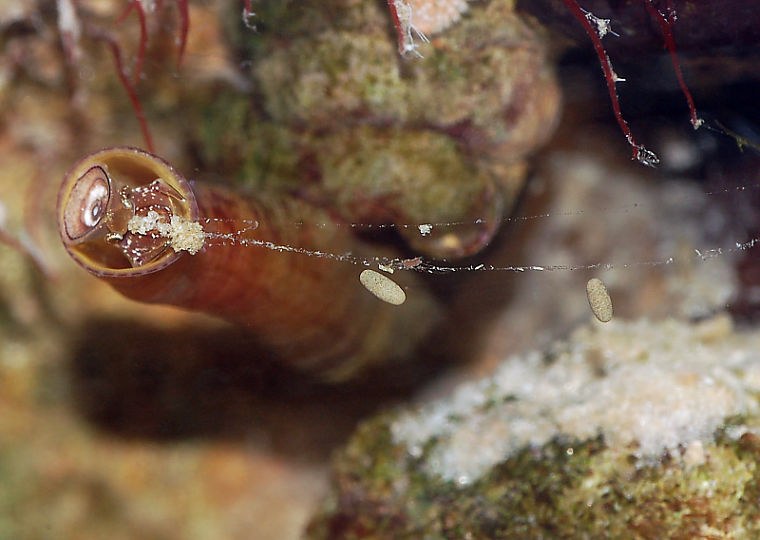 
Vermetid snails form tubes that resemble those of tube worms, but they are actually stationary gastropods whose shells are cemented to hard substrates.  Of greater significance for this article and for reefkeepers is vermetids’ other most notable characteristic: They cast out mucus nets from the ends of their open tube shells.  The mucus acts like a sticky trawling net trapping plankton and detritus that passes by.

Researchers studied six coral reef sites with varying degrees of vermetid coverage ranging from 0% (gastropod-free) to 100% (completely covered in mucus net).  They discovered herbivorous fishes were up to 450% less likely to graze algae in the presence of vermetid mucus nets.  Furthermore, when they removed mucus nets from select sites, herbivorous foraging activity doubled, confirming the mucus nets were the grazing deterrent.

As if it wasn’t enough that vermetids hurt corals by impeding their skeletal growth and overall survival, they also aid corals’ algal competitors.

There are no proven predators for vermetid so reefkeepers should try to manually eradicate them when spotted.  While vermetid snails don’t always cause immediately observable harm to reef tanks (especially in small populations), it’s not a good idea to ignore them because they can multiply like the plague and become a big problem.  Reefkeepers report hit-and-miss success with biological control using mithrax crabs, hermit crabs, and coris, halichoeres, and six-line wrasses.  Sure-fire methods to kill vermetid include covering the ends of their tube openings with superglue gel, reef-safe epoxy, and injecting caustic chemicals such as HCl (muriatic acid) and NaOH (lye), the latter being a better option around calcareous live rock.