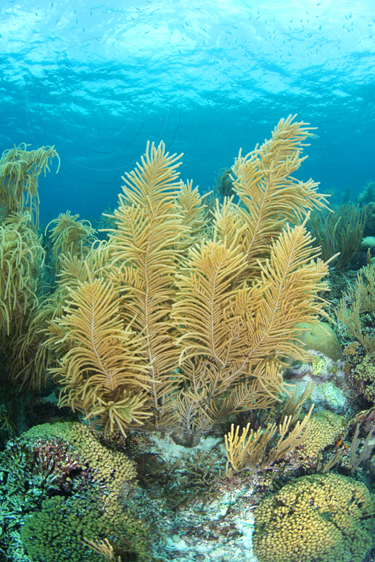 I have another beautiful reef scene for you all today that I took in an area we call the “gorgonian forest” located on the east end of the Sea Aquarium house reef.

Alcyonacea is an order of sessile colonial cnidarians found throughout the oceans of the world, especially in the tropics and subtropics. The name “Gorgonacea” is no longer considered valid and Alcyonacea is now the accepted name for the order. Gorgonians are also known as sea whips and sea fans and are similar to the sea pen, a soft coral. Gorgonians are closely related to coral. Individual tiny polyps form colonies that are normally erect, flattened, branching, and reminiscent of a fan. Others may be whiplike, bushy, or even encrusting. A colony can be several feet high and across but only a few inches thick. They may be brightly coloured, often purple, red, or yellow. Photosynthetic gorgonians can be successfully kept in captive reef aquariums. Gorgonians are classified in the phylum Cnidaria, class Anthozoa, alongside the orders Alcyonacea (soft corals) and Pennatulacea (sea pens). There are about 500 different species of gorgonians found in the oceans of the world, but the are particularly abundant in the shallow waters of the western Atlantic, including Florida, Bermuda, and the West Indies.