A stunning discovery was made in one of the most unsuspecting areas of our ocean. Scientists from an international team including researchers from the University of Georgia and the Federal University of Rio de Janeiro, have discovered a reef in an area where the freshwater Amazonian river meets the salty ocean. A “plume” is created when this freshwater meets the ocean in a turbulent mix, where differing levels of acidity, salinity, PH, and sediment affect a large coastal area of the tropical North Atlantic shelf. “Our expedition into the Brazil Exclusive Economic Zone was primarily focused on sampling the mouth of the Amazon, but Dr. Rodrigo Moura had an article from the 1970s that mentioned catching reef fish along the continental shelf and said he wanted to try to locate these reefs.” said Patricia Yager, an associate professor of marine sciences in UGA’s Franklin College of Arts and Sciences and principal researchers on the River-Ocean Continuum of the Amazon project. “The paper is not just about the reef itself, but about how the reef community changes as you travel north along the shelf break, in response to how much light it gets seasonally by the movement of the plume,” said Yager, who spent two months in Brazil as a Science Without Borders visiting professor. 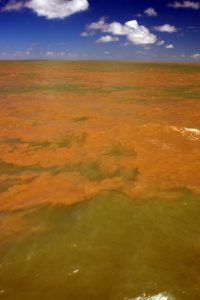 “In the far south, it gets more light exposure, so many of the animals are more typical reef corals and things that photosynthesize for food. But as you move north, many of those become less abundant, and the reef transitions to sponges and other reef builders that are likely growing on the food that the river plume delivers. So the two systems are intricately linked.” added Yager. While reefs of all types still face extreme environmental circumscription as a result of human activity, this discovery amplifies the resiliency of coral reefs, and leaves the reader with another example of how adaptation will always prevail. Read more here!