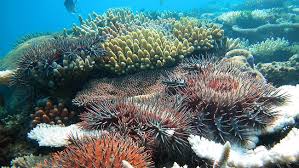 Australia’s coral reefs are under attack from the rapidly reproducing crown-of-thorns starfish. The crown-of-thorns starfish currently pose one of the greatest threats to the Great Barrier Reefs. According to research by the Australian Institute of Marine Science, coral population on the reefs has declined by about 50 per cent over the past 30 years, with Crown-of-thorns starfish attributed to at least half of this decline. Since the 1960’s, there have been four main outbreaks of crown-of-thorns populations. There are short and long term strategies currently in effect to try and control the ever growing problematic population. As I wrote about previously, most recently, a lethal injection providing robot has been designed to help combat the crown of thorns population. Now, a new study by the  Australian Institute of Marine Science (Aims) has discovered that vinegar may be the next key to fighting the starfish battle. Vinegar is very inexpensive and accessible. However, there still needs to be more research conducted to make sure vinegar does not harm other marine life. “For that, vinegar is a great method. Vinegar can be bought at any supermarket and is roughly half the price,” lead researcher Lisa Bostrom-Einarsson from James Cook University told the BBC’s Rone McFarlane. MORE