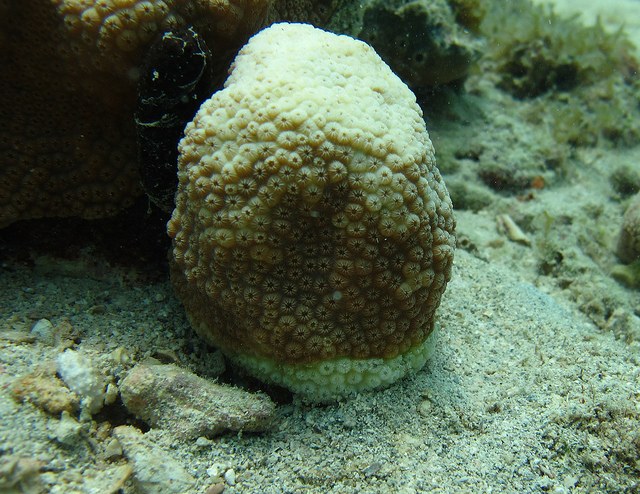 “White plague” attacking the base of this brain coral now identified as viral in origin.


It is true that bacteria has been identified as the main cause of many coral diseases.  Take for example “white pox” (not to be confused with “white plague”), which was devastating Atlantic Elkhorn Acropora.  It turned out that bacteria from human sewage was the cause of “white pox.” Yikes!  But as if bacteria, crabs, flatworms, starfish, nudibranchs, snails, cyanobacteria, algae, and heat weren’t enough enemies of corals, researchers are learning that viruses can also kill corals.

CORVALLIS, Ore. – They call it the “white plague,” and like its black counterpart from the Middle Ages, it conjures up visions of catastrophic death, with a cause that was at first uncertain even as it led to widespread destruction – on marine corals in the Caribbean Sea.

Now one of the possible causes of this growing disease epidemic has been identified – a group of viruses that are known as small, circular, single-strand DNA (or SCSD) viruses. Researchers in the College of Science at Oregon State University say these SCSD viruses are associated with a dramatic increase in the white plague that has erupted in recent decades.

Prior to this, it had been believed that the white plague was caused primarily by bacterial pathogens. Researchers are anxious to learn more about this disease and possible ways to prevent it, because its impact on coral reef health has exploded.

“Twenty years ago you had to look pretty hard to find any occurrences of this disease, and now it’s everywhere,” said Nitzan Soffer, a doctoral student in the Department of Microbiology at OSU and lead author on a new study just published in the International Society for Microbial Ecology. “It moves fast and can wipe out a small coral colony in a few days.

“In recent years the white plague has killed 70-80 percent of some coral reefs,” Soffer said. “There are 20 or more unknown pathogens that affect corals and in the past we’ve too-often overlooked the role of viruses, which sometimes can spread very fast.”

This is one of the first studies to show viral association with a severe disease epidemic, scientists said. It was supported by the National Science Foundation.

Marine wildlife diseases are increasing in prevalence, the researchers pointed out. Reports of non-bleaching coral disease have increased more than 50 times since 1965, and are contributing to declines in coral abundance and cover.

White plague is one of the worst. It causes rapid tissue loss, affects many species of coral, and can cause partial or total colony mortality. Some, but not all types are associated with bacteria. Now it appears that viruses also play a role. Corals with white plague disease have higher viral diversity than their healthy counterparts, the study concluded.

Increasing temperatures that stress corals and make them more vulnerable may be part of the equation, because the disease often appears to be at its worst by the end of summer. Overfishing that allows more algae to grow on corals may help spread pathogens, researchers said, as can pollution caused by sewage outflows in some marine habitats.

Viral infection, by itself, does not necessarily cause major problems, the researchers noted. Many healthy corals are infected with herpes-like viruses that are persistent but not fatal, as in many other vertebrate hosts, including humans.