Wash your hands before putting them in your reef tank 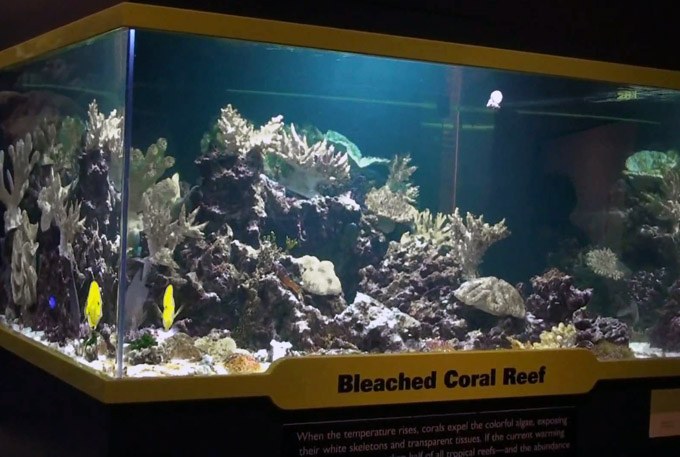 This aquarium exhibit at the Birch Aquarium (San Diego) shows what could happen – in both natural reefs and reef aquariums – when corals are exposed to oxybenzone.


Oxybenzone has been linked to coral bleaching in multiple studies, but a new study by the University of Central Florida finds that this chemical is much more harmful to corals than previously thought.  In concentrations as little as 62 parts per TRILLION (equivalent to one drop of water in six-and-a-half Olympic swimming pools), oxybenzone alters corals’ DNA.  It is particularly harmful for coral reproduction; oxybenzone deforms coral larvae by trapping them in their own skeleton, making then unable to float with currents and disperse.

The study sounds an alarm bell for the reef tourism industry, whose patrons slather their bodies with sunscreen before taking a dip in the oceans. The levels of oxybenzone recorded at popular tourist beaches far exceeds known toxicity levels.  The researchers recommend everyday divers to ““wear rash guards or scuba wetsuits and skip all the hygienic products when you go diving.”  Sunbathers should also stay out of the water.

The findings of this study should also serve as a reminder to reefkeepers to wash their hands (and arms) before putting them into your aquariums.  Oxybenzone isn’t only found in sunscreen.  It is used not only as a photoprotective agent but also as a photostabilizer in a lot of other common beauty products such as fragrances, hair spray, lotions, moisturizers, cosmetics, and nail polish.  And as mentioned, oxybenzone is toxic in very low concentrations, so it doesn’t take much to harm your corals.