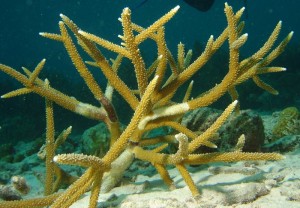 Bad news: According to the Endangered Species Act (2006), elkhorn and staghorn corals are listed as threatened.

BUT: A new draft recovery plan released by NOAA Fisheries at the beginning of the month identifies criteria that would allow the coral species to be removed from the ESA endangered and threatened species list.  (It’s so nice when someone finds a way to “reverse” damage that humans have done).

Elkhorn and staghorn corals have declined by up to 97% since the 1970’s with the main causes of decline being disease, temperature-induced bleaching and storms.  This new plan lists ways to reduce threats (global threats related to climate change and local threats to the species such as habitat loss and pollution) and steps to enhance the population by putting nursery-grown corals back on the reef, as well as addressing research and monitoring.