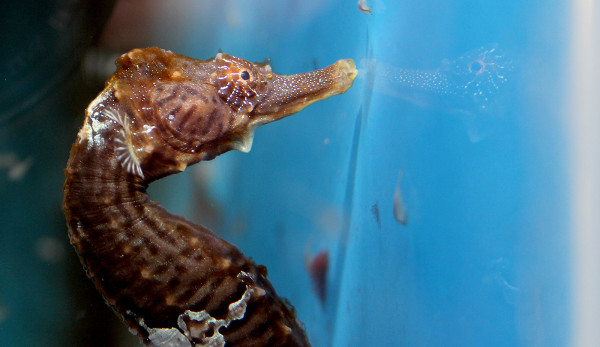 Seahorse mid strike; hyoid bone visible which is part of the complex musculoskeletal system seahorses utilize in suction feeding. This can be damaged easily. Photo by Tami Weiss

You may have heard of ‘weak snick’, a common description of a clinical sign in syngnathids whereby attempts to feed appear weakened, that is, they don’t produce the nice ‘click’ sound you like to hear when healthy syngnathids strike at their prey. Multiple causes have been attributed to this particular clinical sign however in some severe progressive cases; this has been suspected to be due to a nutritional myopathy, which simply means a muscle disease caused by a nutritional imbalance. The suspected nutritional myopathy can present in many ways including: lethargy, weak snick, inappetence, and in severe unresolved cases, death.

Often times, affected animals will succumb to secondary infections (often bacterial or parasitic) as these animals become immunocompromised from stress and malnourishment and this can often obscure the fact that the primary problem is of a nutritional origin.

While the cause has not been confirmed in syngnathids, the primary suspects are oxidized fatty acids, particularly susceptible oxidation are highly unsaturated fatty acids (HUFAs) as well as deficiencies in vitamins E and C.and the mineral selenium.