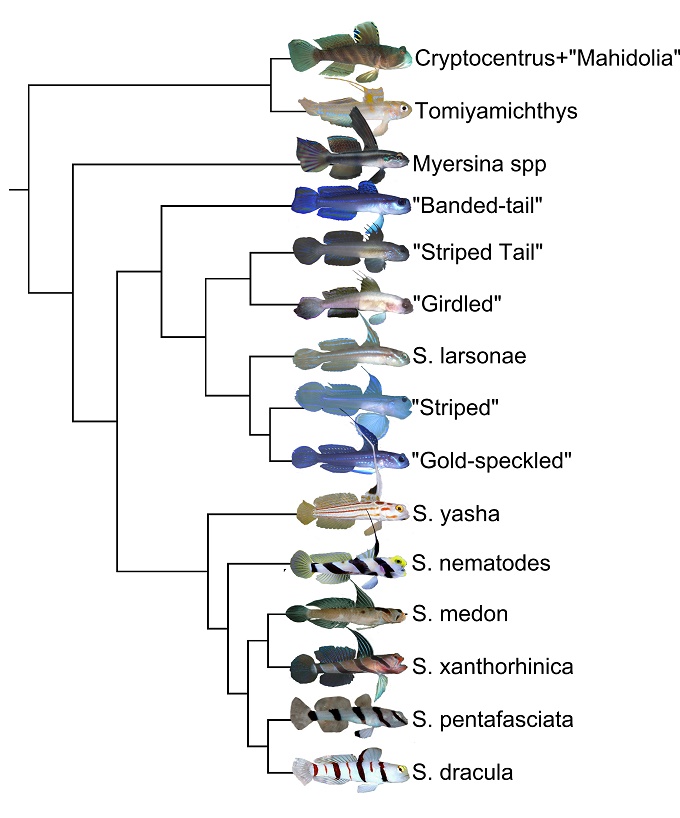 A hypothetical phylogeny for this group. 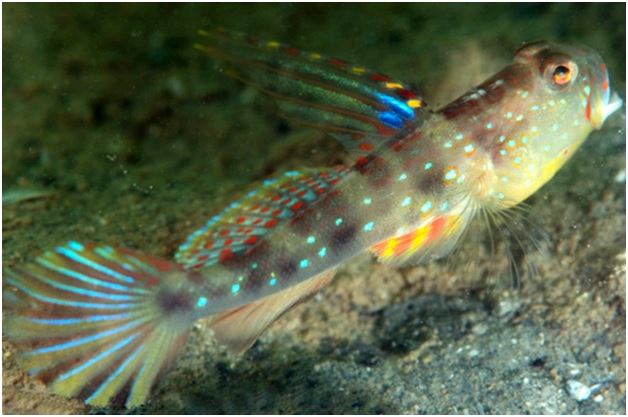 The full extent of speciation in this diverse group of gobies is only now coming to light. We still need scientific descriptions for the many poorly known variants, and further exploration to discover the many others which likely await discovery. It seems almost certain that regions poorly documented by divers, (e.g. Eastern Papua New Guinea or the Indian Ocean) would harbor more diversity. Furthermore, molecular study would go a long way towards unraveling the byzantine interrelationships amongst these many similar forms. 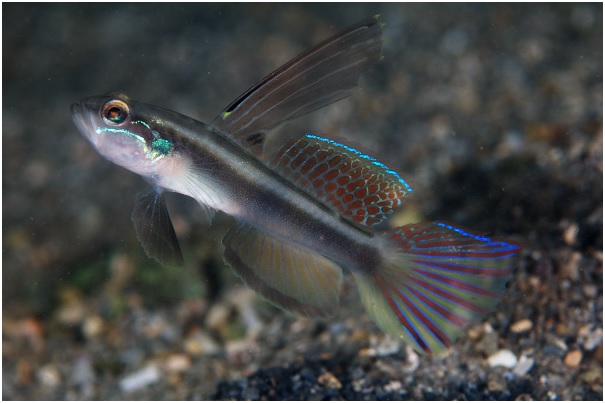 But a general trend seems to become clear, the barred coloration typical of Stonogobiops has its antecedents in the longitudinally-striped S. yasha, which in turn can be traced to the similarly striped complex of undescribed species surrounding S. larsonae. From there, we can find many similar patterns present amongst more traditional Myersina. For instance, the short diagonal stripe present on the cheek can be seen in M. macrostoma, and the appearance of reflective blue spots on the head seems to be present throughout the genus. Many species also have a longitudinally arranged body pattern (e.g. M. lachneri, macrostoma, nigrivirgata). Even the colorful caudal fin seen in species like M. macrostoma and M. adonis can be found in the Striped-tail Shrimpgoby. In total, there are a number of species occurring in Myersina that appear to form a continuum with these little blue-striped shrimpgobies, and ultimately to Stonogobiops. 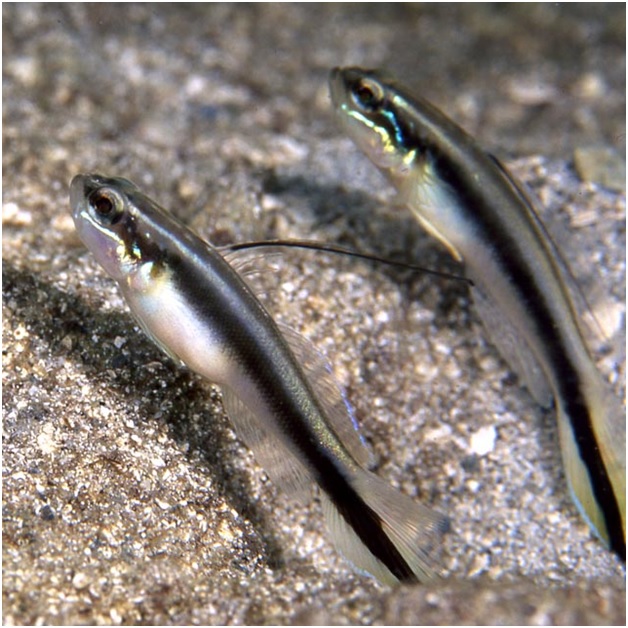 This article is no place for any formal taxonomic moves to be made or species to be named, particularly when based on something so trivial as color patterns. The ultimate taxonomic fate of this group awaits future study from a taxonomist well-versed in the nuances of goby identification. Until that time, the many mysteries surrounding this enigmatic group will continue to elude us. There is surely a remarkable story of evolution and speciation to be unraveled amongst these astounding little fishes, and their story serves to illustrate just how poorly we know the world we live in.

This article benefitted immensely from the following individuals: Dr. Gerry Allen, Dr. Douglass Hoese, Dr. John Randall, LemonTYK, Sue and Rogan Chapman. And, without the efforts of countless Japanese divers documenting their journeys online, there would have been far less to report on the many undescribed species. They are too numerous to mention, but I thank them all for their nerdy fish obsession.

Winterbottom, R.   2002. A redescription of Cryptocentrus crocatus Wongratana, a redefinition of Myersina Herre (Acanthopterygii; Gobiidae), a key to the species, and comments on relationships. Ichthyological Research v. 49 (no. 1): 69-75.