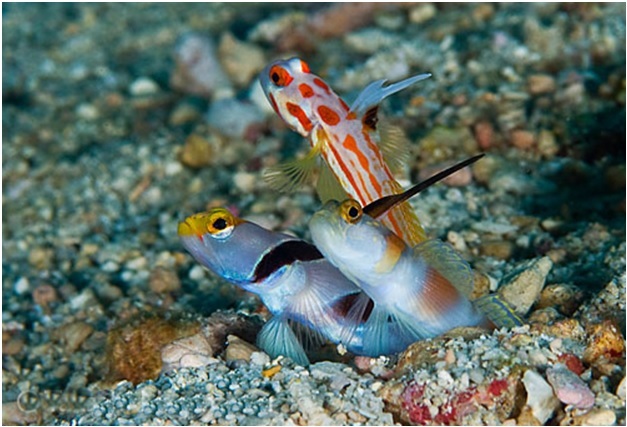 The shrimpgobies of the genus Stonogobiops are a common sight in any aquarium store, with species oftentimes selling for not much more than the cost of a cheap damselfish. Because of this, it might come as a surprise to learn that the half-dozen species that comprise the genus were completely unknown to science as recently as the late 1970’s! The Filamented Shrimpgoby (S. nematodes), a particularly ubiquitous and affordable species in our hobby, was originally known from just a single specimen. So how do we explain this apparent contradiction between the rarity and monetary value of these fish?

Clearly, our knowledge of how to locate these fishes in the wild has improved drastically. Unlike some of their close relatives, Stonogobiops is primarily found at moderate depth (15-45m) and in sheltered sandy or rubbley habitats, generally some distance away from coral reefs. Many of the undescribed species which we’ll discuss in this review are known exclusively from deep, silty environments, where few divers venture. These fishes are in fact quite common in their preferred habitat—it just took a while to discover what that was.

Identifying Stonogobiops is simple enough for aquarists; they are small (by shrimpgoby standards) and typically have four black diagonal bars along the side of the body. The only exception common to aquarists is the Yasha Goby (S. yasha), which has longitudinal red stripes. But the issue becomes murkier when discussing the obscure species S. larsonae, which has a seemingly divergent color pattern—a single reflective-blue longitudinal stripe and similar markings across the cheeks. 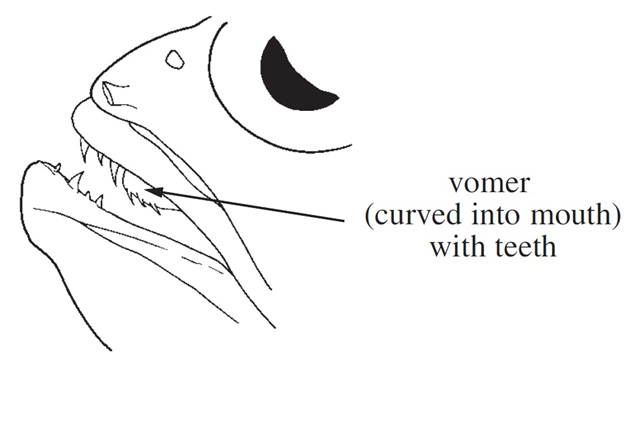 What this phenotypically heterogeneous mix of species shares in common is the possession of a toothed bone (the vomer) in the roof of the mouth. Amongst the enormous family Gobiidae, only a handful of disparate groups share this feature, none of which bear close relations to Stonogobiops. Based on genetic and morphological study, the closest relatives include the commonly seen Cryptocentrus, and the rarer Tomiyamichthys. This toothy mouth provides a strong character to define the genus, but the recent discovery of numerous undescribed species is forcing us to question that assumption, as these new forms illustrate a continuum of color patterns linking them to another poorly known genus of shrimpgobies—Myersina. To understand this properly, we’ll need to individually examine the coloration, ecology and biogeography of the many species in some detail. 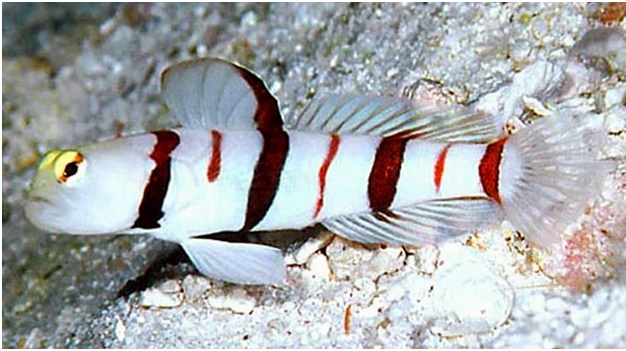 The evocative name of this species can trace its origins back to its initially discovery in a Seychelles lagoon back in the 1970’s. During a collecting dive, one of these diminutive fishes bit the finger of its collector, ichthyologist Roger Lubbock, drawing blood. This led to the discovery of the unique vomerine teeth, and the creation of a new genus to house this fish. The habitat it was found in was typical for the genus—a mix of sand and rubble at 15-40m. 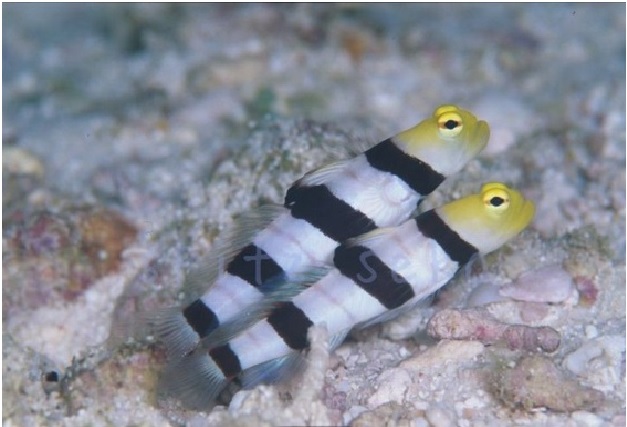 The amount of yellow on the head seems variable. Credit: Spitz Seko

To this day, S. dracula is still poorly documented. In addition to the Seychelles population, it can also be found in the Maldives, from which specimens are regularly exported for the aquarium trade. Identification is simple enough, as there are many useful characters to observe: 1) The first dorsal fin is short and clear, with a black marginal band posteriorly. 2) The thick bars along the body are red, and there are usually thin red bars placed between them. 3) There are two preopercular sensory pores. This last feature is only observable under magnification, but it is important, as it helps show the link to its sister species, S. pentafasciata. 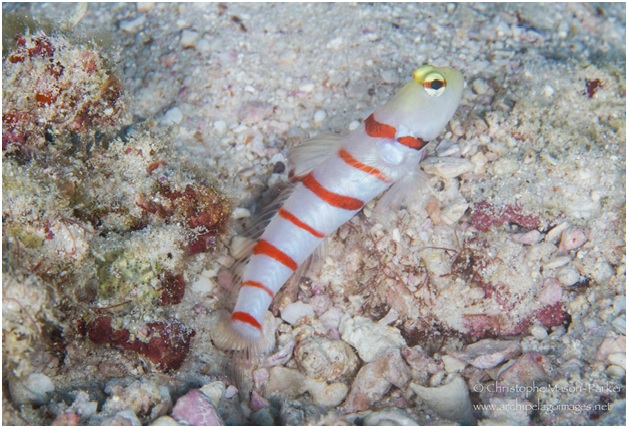 A specimen in the Seychelles, much redder than Maldives specimens. Credit: Christopher Mason-Parker

In my experience, this species is somewhat delicate, with many specimens arriving in a lethargic and emaciated state and, soon after, perishing. This is apparently the result of poor collecting and handling on the part of Maldivian fish distributors, and, given the inherent difficulty present in collecting these fish from their burrows, could be indicative of a narcotizing agent of some sort being administered. Buy these fish with some caution, as specimen that refuse food are highly suspect. 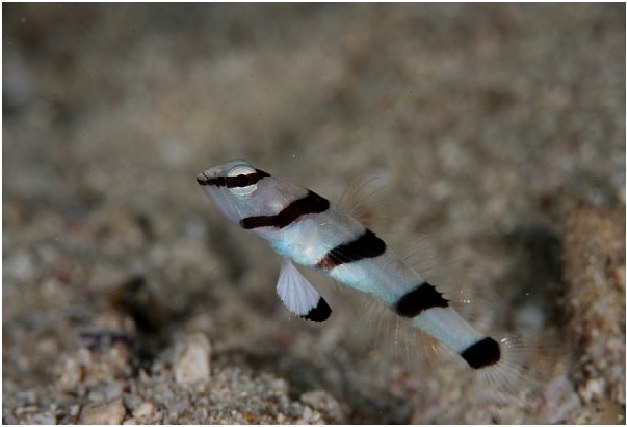 The sister species to the Indian Ocean endemic S. dracula is found a great distance away in the waters of Southern Japan. Its distribution there appears to be limited to around Okinawa eastward to the Izu Islands. It is apparently absent from the aquarium hobby, and is remarkably lacking from even the Japanese market. Its habitat is essentially identical to its sister species, and it shares with it a preference for living alongside the pistol shrimp Alpheus randalli. Every in situ image I could find (and there are many online) was invariably paired alongside this shrimp, but most Stonogobiops are known to be at least somewhat promiscuous in the choice of their crustacean concubine.

To identify this species, look for: 1) A series of five black bars along the body, with the first running diagonally through the eye to the bottom of the lower jaw. 2) A black bar across the tip of the fused pelvic fins. 3) A completely clear first dorsal fin, lacking any marginal coloration. 4) Paired preopercular sensory pores, as in S. dracula. 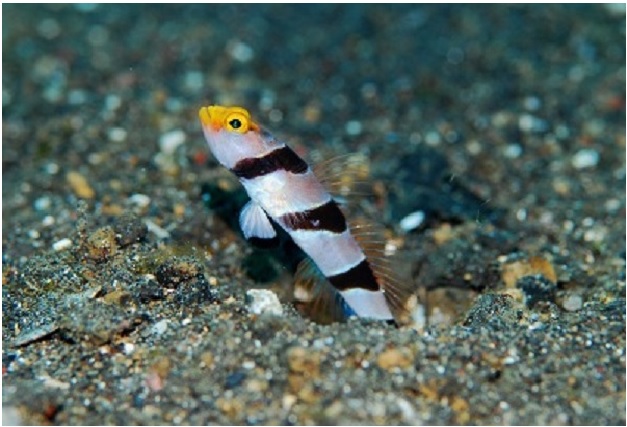 This species nearly always has a white head anterior to the black stripe, which is typically yellow in related species. There are possible hybrids known (presumably with S. xanthorhinica) which possess a yellow head and lack the black bar across the head—these have the typical colorless pentafasciata dorsal fin and a black tip to the pelvic.