The Evolution and Biogeography of Stonogobiops – Part 3 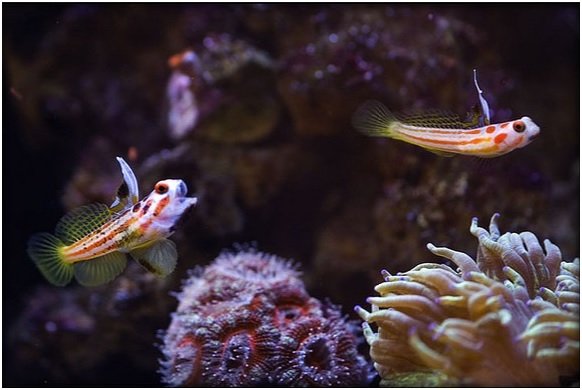 First, a brief etyomology interlude, as the origins of the name “Yasha” is an interesting story. The first specimens to be discovered were found in Japan, where they were given the local name “Yashahaze”. “Haze” is a common name for gobies in Japanese, and “Yasha” is a type of female devil-like creature of Buddhist mythology, which is depicted as having a pair of enlarged canines. And so the prominent vomerine teeth of S. yasha are alluded to in its whimsical name. The species has many other common names. One is a bastardized misspelling (Yashia Goby) which certain marine wholesalers insist upon. Others include more prosaic sobriquets, like the White-ray Goby or, confusingly, the Clown Goby 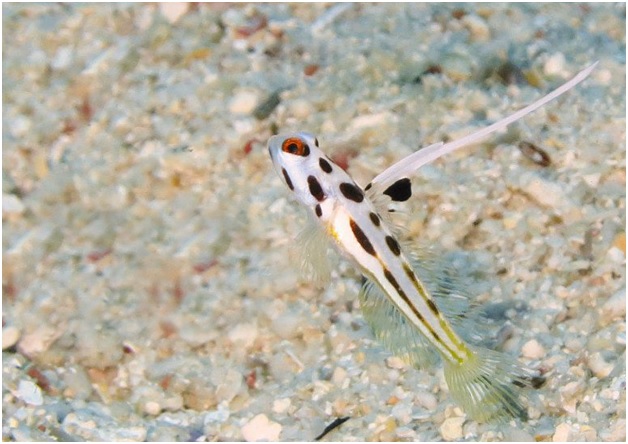 Despite its ubiquity in our hobby,the Yasha Goby first began appearing in aquariums around the late 1990’s, and it was only in 2001 that it was scientifically described. It is still only documented from a handful of scattered locations—the distribution map above includes all verified localities for this species—which gives the impression of a widespread Western Pacific population that is apparently highly sporadic in its occurrence. The preferred habitat is no different from others in its genus—sand or rubble bottoms at moderate depths (15-40m). Why it is that this species is so infrequently encountered in the wild is one of its lingering enigmas and perhaps lends some charm to this already charismatic creature. 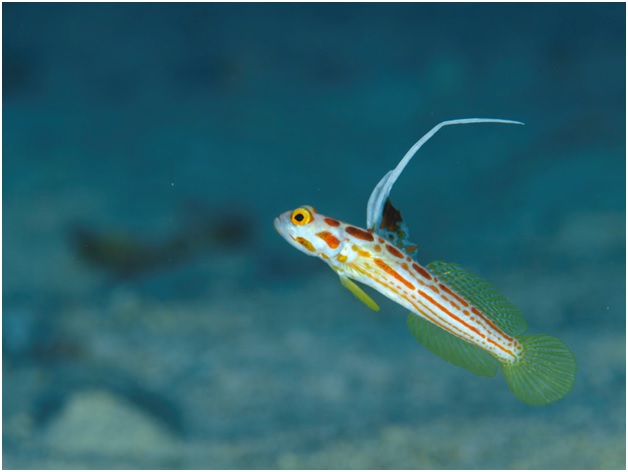 Identification couldn’t be simpler, as this is the only red longitudinally-striped species in the genus, or any genus of shrimpgoby for that matter. S. yasha is often found paired with S. nematodes in the wild, but it is unknown to form other interspecies pairs. This behavioral quirk, in addition to their similar dorsal fin morphology, gives evidence to indicate a close relationship. But it’s difficult to determine whether these two taxa are truly sister species or if yasha is instead basal to the other Stonogobiops. Answers to that await genetic study.

One argument to be made against a direct monophyly for these two species is the highly disparate color patterns. The longitudinal stripes of yasha are a feature more commonly seen in the closely-related genus Myersina. Also take note of the large red spots on the head of yasha, which correspond to the location of the first diagonal bar seen in other Stonogobiops species. When comparing these Myersina-like and Stonogobiops-like features, it seems as if yasha exists in the middle of a morphological continuum linking these two genera.

Finally, there is some amount of variation of coloration and pattern present in this species, though nothing that would indicate any cryptic species being present. Larger specimens often develop a second pattern of thinner longitudinal lines between the three larger stripes. Also, some particularly erythric specimens will obscure the distinction between the anterior spots and the stripes. Males seem to develop some amount of melanism, with black flecks scattered along the body and a black tip developing on the pelvic fins. 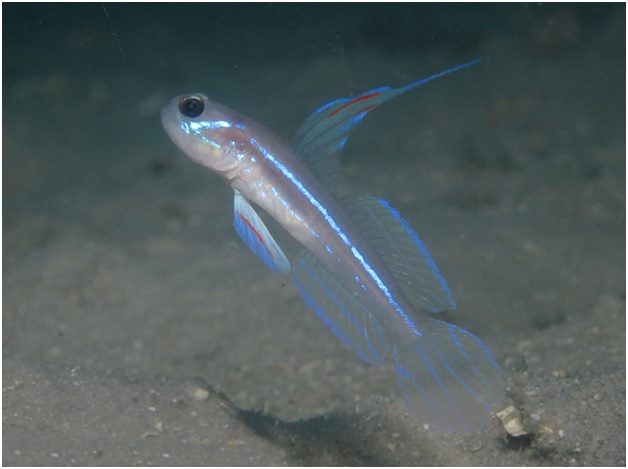 From a phylogenetic perspective, this is where things really get interesting. This species is unknown to aquarists, and few photographs exist of living specimens. At first glance, it is hard to believe this species would be closely related to the other heavily-patterned species seen in its genus. And, in fact, when it was discovered and described in the mid-1980’s it was placed in the related genus Myersina. These gobies are unfamiliar to aquarists, as the nine described species occur in silty (and often brackish) lagoon far from coral reefs and aquarium collectors. Interestingly, unlike the sand and rubble habitats favored by other Stonogobiops, S. larsonae makes its living in the same silty environs associated with Myersina.

Despite so much ecological and morphological evidence suggesting this fish to belong within Myersina, it was subsequently discovered that specimens possessed the vomerine teeth diagnostic for Stonogobiops, and so it was moved into its present taxonomic home. 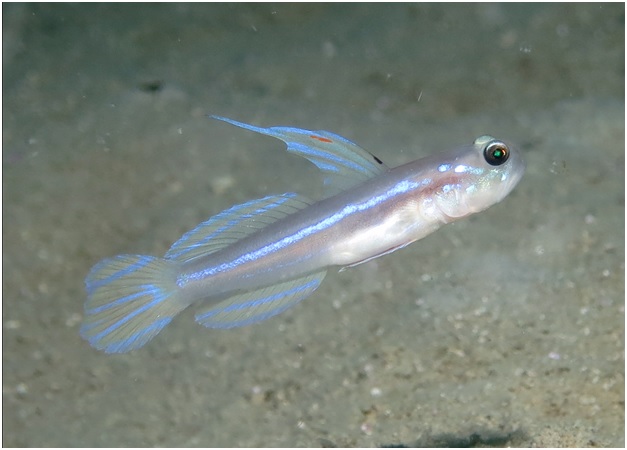 S. larsonae was originally described from the Kimberley Coast in Western Australia, and it has since been found along the eastern coast near Cairns and further south at Hervey Bay. Dr. Gerry Allen also reports this species from the Anambas Islands in the South China Sea, but it is uncertain if this relates to this species or one of its undescribed congeners. S. larsonae is part of a complex of similar forms sharing an unpatterned body with variable amounts of reflective-blue longitudinal striping, as well as variably formed and patterned dorsal fins. 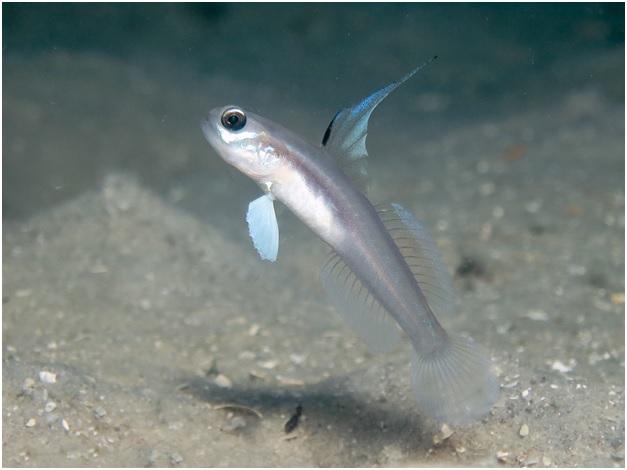 To recognize S. larsonae, look for: 1) A tall, falcate dorsal fin in males, infused with reflective blue coloration, and with variably formed red blotches in the membranous areas. There is also a variable amount of black located along the leading edge of the fin, though this is very minimal in observed specimens. 2) Each fin is margined in reflective blue, as well as a median band on the caudal fin. Mature specimens (perhaps only males) develop an orangish hue in the center of these marginal bands, which gives the impression of parallel blue lines. 3) A thin red band forms along the proximal edge of the pelvic fin’s marginal blue line. 3) A well-formed longitudinal stripe of reflective blue is present in the center of the body. Beneath this medial stripe may appear a second similar stripe, which is poorly-formed or absent. These two stripes correspond perfectly with the stripes seen in S. yasha, and provide more evidence for a continuum of forms linking Stonogobiops and Myersina 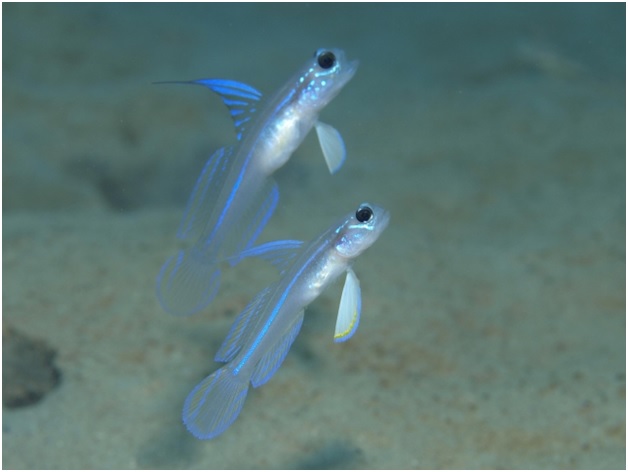 In the waters around the Ryukyu Islands of Japan, east to the Izu Islands, there is a species nearly identical to S. larsonae. Its Japanese name is the Hagoromo Goby, which apparently references the colorful, feathered kimonos worn by spiritual beings called tennin in Japanese Buddhism. 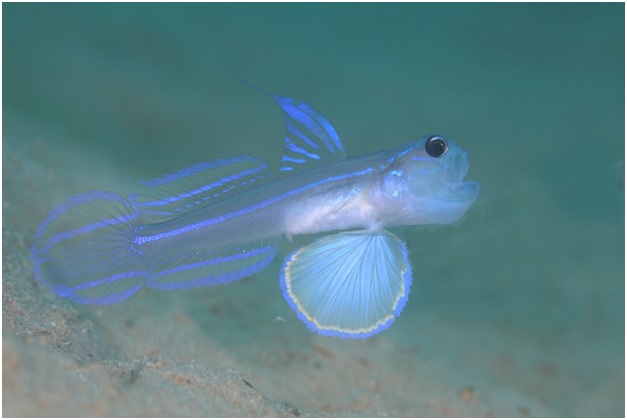 Another male from Okinawa. Credit: Michiki618

It can be tentatively identified by the following characters: 1) The dorsal fin never develops any black or red blotches, though the entire fin may be infused with a subtle amount of black. Images of juveniles show a darker fish, with scattered melanophores throughout the body and fins, and some amount of this is a holdover in the adults. 2) There is a yellow submarginal band in the pelvic fins, versus the red seen in larsonae. 3) The ventral longitudinal stripe is absent, or represented by only a very short anterior section. 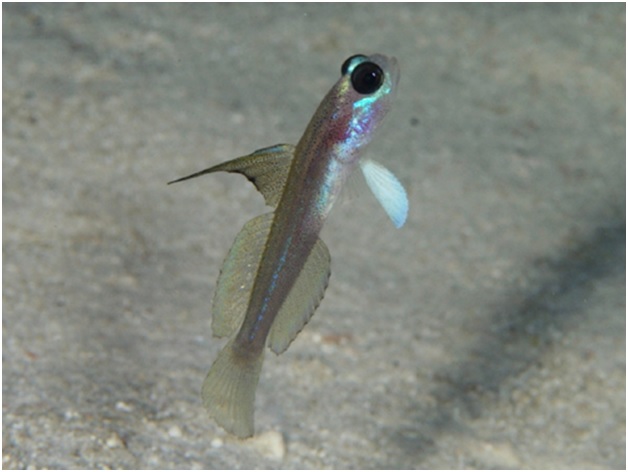 Whether this Japanese endemic is truly a unique species or merely a regional variant is impossible to say without further study of any populations which may be present in Indonesia and the Philippines. The great many undescribed variants in this species group seems to indicate that there is an intense amount of speciation taking place, and so these potentially allopatric ranges offer some support for these being reproductively isolated lineages (“species”). 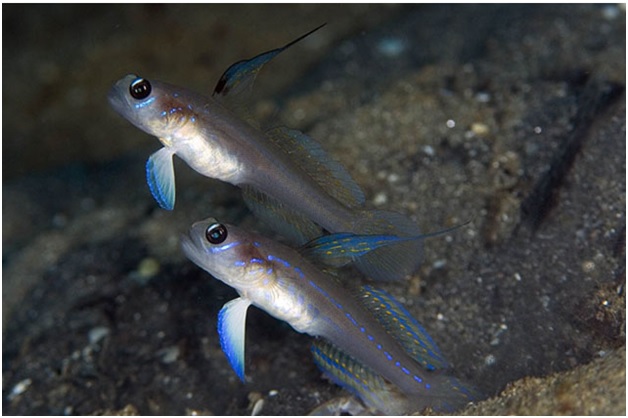 Cebu and Bali are the only confirmed locations for this apparent species, placing it between its sister species—larsonae and the Striped Shrimpgoby. The overall appearance in these three is quite identical. 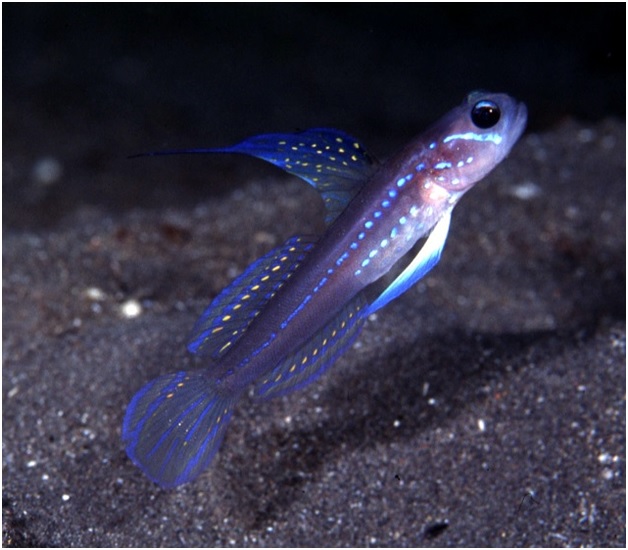 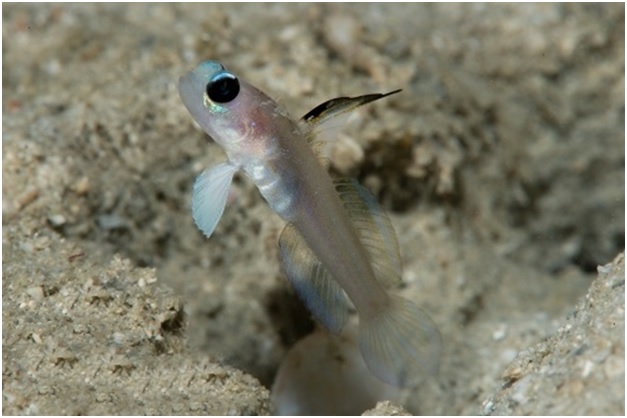 A juvenile in Cebu, less melanistic than the Striped Shrimpgoby. Credit: unknown

The identifying characteristics to look for are: 1) Gold speckles scattered across the dorsal fin, which is dark blue anteriorly and lighter blue posteriorly, lacking any apparent black or red blotches. Juveniles lack these gold spots, and have the anterior spines of the dorsal fin black, which mostly disappears in the adults. 2) Gold speckles present as a submarginal band beneath the blue band in each unpaired fin. 3) The submarginal red or yellow band of the pelvic fins is apparently lacking. 4) Both longitudinal stripes are formed by a series of closely set spots anteriorly, joining into longer bars posteriorly. The ventral line extends half the length of the dorsal.