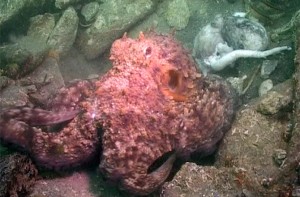 While this is falsely entitled to suggest this is the first time Octopus Cannibalism has been caught on film (National Geographic has this wild, violent video from 2010 of an octopus completely engulfing another), this is still pretty fascinating to me. Perhaps they meant this is the first time this specific species has been recorded engaging in this behavior? Anyway, not quite as exciting as the 2010 footage, the video shows O. vulgaris leisurely noshing on a deceased octopus. Since it’s not on film, it’s hard to determine whether the cephalopod actually killed his buddy or if he happened upon the corpse and decided to chow down, starting with the arms (c’mon, that’s the best part!). Follow the link for a video from Live Science above, or check out more from Discovery News.  Think I’ll pick up some squid from my local fishmonger for dinner tonight.