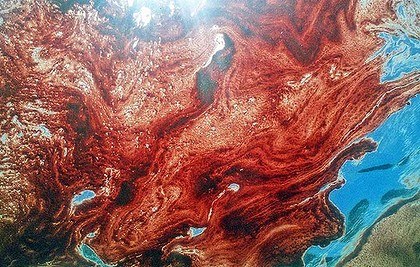 
Every year, a spectacular natural event occurs off the western coast of Australia.  For four days, corals begin broadcast spawning en masse.  This spawning event coincides with the lowest tide, seven to ten nights after a full moon.

So many gametes are released during these four days that it colors large swathes of coastal water a bright red (similar to “red tide” dinoflagellate blooms, which this spawning event has often been confused for).

The coral spawn, however, is not without potential risk to reef health … this year in particular.  2010-2011 has been a La Nina season, meaning warmer waters off Western Australia as well as calmer seas.  The risk is the spawning event could reduce oxygen levels and threaten corals, fish, and the reef as a whole.  This is due to the higher temperature (water has less capacity to hold oxygen) and calm ocean current (unable to “flush” and distribute the gametes)

Still, spawning events are spectacular sights to behold and will attract thousands of visitors to Western Australia.  And thousands (if not millions) of coral “babies” is good news for reef lovers everywhere.