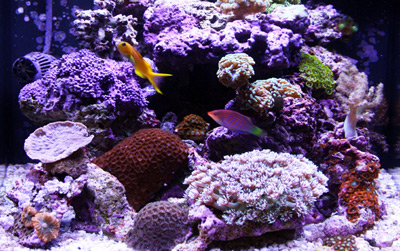 Sometimes you have a fish in your aquarium you never see eating, but it that a problem? It depends.I’ve had this fish in my aquarium for months now and it’s as fat and happy as can be, yet I’ve never actually seen it consume any of the food’s I’ve offered. How on earth is it getting enough to eat?”Caribbean Chris and I often field queries like this here at Saltwater Smarts, and they pop up with some regularity on internet forums as well. So what’s the answer? How can a fish survive for a long period in a closed aquarium if it never accepts any of the foods it’s offered? Well, there are a few potential explanations as well as a worrisome possibility to consider. It’s feasting on resident microfauna and/or flora The fish could, for example, be feasting on amphipods, copepods, worms, and other tiny invertebrate “bugs” that inhabit live rock and live sand. Your system could be crawling with these critters without you even being aware of it unless you check out your system with a flashlight after dark MORE