When no other shell is available, a hermit crab uses an anemone instead 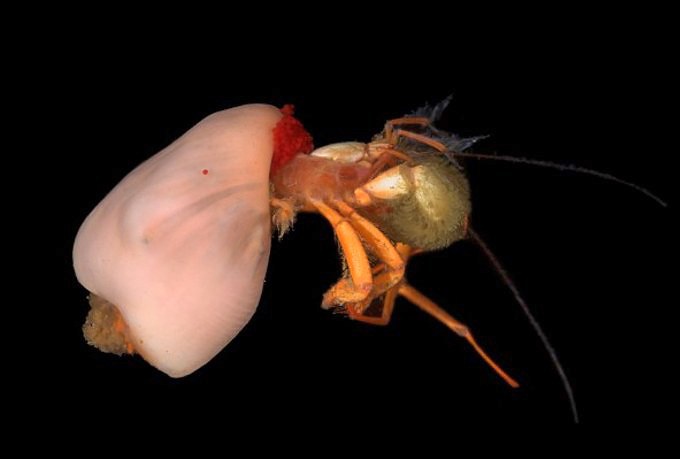 A hermit crab uses an anemone as a shell. Photo credit: Greg Rouse.


Normally when a hermit crab outgrows its current shell, it will search around and select a new, larger shell to use for protection from predators. When one isn’t available, however, they will use any other object that’s available and suitable its purpose. Previously, we blogged about “designer shells” for hermits made from blown glass. Others have printed shells for their hermits using 3D printers and ABS filament. Still others have used broken bottle tops for shells. Hermits are resourceful shelter scavengers when need be.

On an expedition to deep sea hydrothermal vents in 2010 off Costa Rica, research led by Lisa Levin of the Scripps Institution of Oceanography at UC San Diego has shown another option for hermits: using an anemone as a “shell” for protection against predation. It is not uncommon for hermits to place small anemones on their shells for added protection. The anemone benefits by feeding on leftover bits from the hermit’s meals and the hermit benefits from the protection offered by the anemones’ stinging tentacles. In this particular instance, however, the hermit actually used the anemone as its entire “shell.”  What the researchers believe probably happened was that this hermit crab originally had a small anemone on its shell; As the crab outgrew the shell, the anemone grew and completely replaced the shell on the hermit’s back.

Researchers said the area lacks large shells suitable for hermit crabs.  This is another instance demonstrating the resourcefulness of hermit crabs.

(via Scripps Institution of Oceanography)