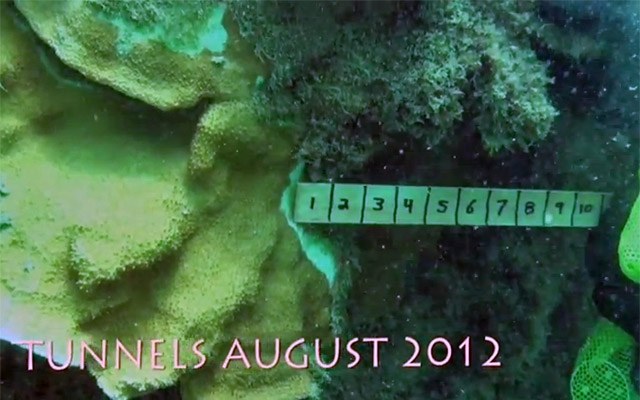 Scientists measure the rate of progression for White Coral Disease in Hawaii.


Starting next week, a new team of scientists will head to Kauai to investigate the pathology of these diseases.  Researchers from the University of Hawaii and USGS Infectious Disease Department believe bacteria may be to blame for the unprecedented deadly infections in Hawaii’s coral reef.

This Hawaiian outbreak sounds eerily similar to Acroporid serratiosis (APS), AKA White Pox Disease, a fast-moving infection that decimated Caribbean Elkhorn Coral (Acropora palmata) in the late 1990s through the 2000s.  Last year, scientists identified the culprit of White Pox diease: a bacterium Serratia marcescens. This bacteria is found in human excrement and a correlation was established between untreated human sewage and White Pox.  When local Floridian communities improved their waste management facilities, the occurrence of White Pox infections disappeared.

Is human activity once again to blame for the infections in Hawaii?

Here is a video by marine biologist Terry Lilley describing the problems facing Hawaii’s coral reef.  He discusses in detail the new White Coral Disease syndrome at approximately the 3:30 mark.