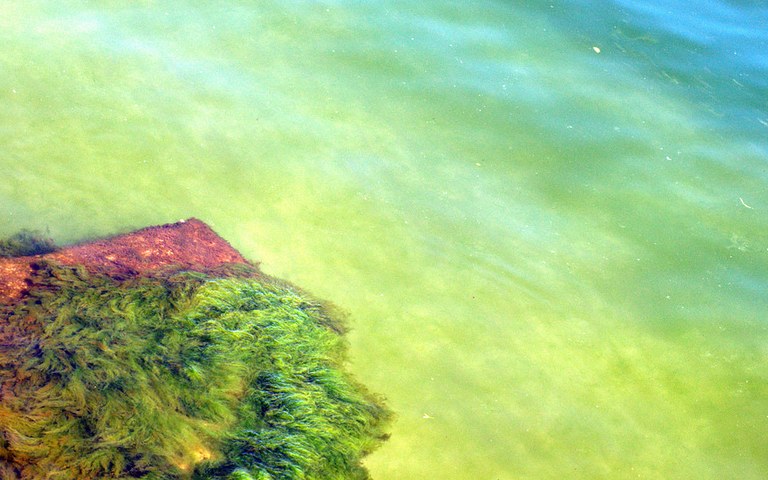 It’s a big ocean. What is supplying it with vitamin B-12? Photo by Lara Torvi.

Vitamin B-12, and a knockoff version, create complex market for marine vitamins

The New Year is a busy time for pharmacies and peddlers of all health-related products. In the oceans, marine organisms rely on nutrients, too, but the source of their vitamins is sometimes mysterious.

University of Washington oceanographers have now found that vitamin B-12 exists in two distinct versions in the oceans. A microbe thought to be a main supplier of B-12 in the open oceans, cyanobacteria, is actually making a “pseudo” version that only its kin can use.

The study has implications for where algae and other organisms can get a vitamin that is essential to fueling marine life. The paper is in the Jan. 10 issue of the Proceedings of the National Academy of Sciences.

“I think the world is getting used to the idea that all lifeforms are in some ways dependent on microorganisms,” said corresponding author Anitra Ingalls, a UW associate professor of oceanography. “This is another case where microorganisms are playing a really big role in the survival of others, but not quite in the way that we had expected.”

All animals, from humans to whales to sea cucumbers, need vitamin B-12. But only certain microbes can make the complex, cobalt-containing molecule. For land dwellers a main source is the microbes that thrive in animals’ guts, which is why beef is such a good source of B-12. Shellfish also accumulate a lot of B-12. In the surface waters of the open oceans, a main supplier of B-12 was believed to have been cyanobacteria.

But the new paper uses various techniques — including sampling in the Pacific Ocean, genetic analyses and growing bacterial cultures in the lab — to prove that cyanobacteria make a different form, known as “pseudo” B-12.

That means that all the other light-absorbing phytoplankton in the oceans are getting their B-12 from somewhere else.

“Phytoplankton are incredibly important as the base of the marine food web, for oxygen generation on Earth and carbon uptake in the ocean,” said first author Katherine Heal, a UW doctoral student in oceanography. “Somebody’s making B-12 for them, and it’s not who we thought it was.”

The first hint of a knockoff form of B-12 came from the marine algae spirulina, a popular health supplement. Analyses of its contents in Japan showed an unusual form of the B-12 molecule.

In previous research, Heal developed a method for measuring trace amounts of B-12 in seawater that can distinguish between similar molecules. The new study applied that technique to see where different forms of vitamin B-12 exist in the open ocean.

“When I started looking, I saw that in some parts of the ocean the pseudo B-12 is even more common than the regular B-12,” Heal said.

The research confirms that virtually all cyanobacteria, the dominant form of light-harvesting organisms in oceanic gyres and other parts of the open ocean, only make and use pseudo B-12. The two forms of B-12 are incompatible, so cyanobacteria also have a different form of the protein that requires that vitamin to function.

“Nobody has shown that this molecule, pseudo B-12, exists in the environment,” Heal said. “Now we know where it comes from, why it’s there, and we have some hints that it can be rearranged.”

The marine environment might contain a specialized subset of microbes that can convert pseudo B-12 into regular B-12, creating a sort of black market for the converted vitamins.

“That would require several specific microbes to coexist in the same place, and suggests a complex interdependency,” Ingalls said.

The authors also show that for many parts of the ocean it now appears that regular B-12 is directly supplied by marine archaea. Experiments in the study show that archaea may be the dominant source of B-12 in parts of the ocean where they live, furthering previous results from the UW research group.