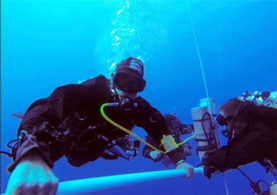 This title put me off a bit: “Man Sets World Record for Deepest Underwater Dive”… what other kinds of dives are there? Skydiving? But then that’s a fall? Whatever, I suppose if it just said “dive” I’d say “into what?”. Moving on. So this Egyptian daredevil recently took a plummet into the depths of the Red Sea for the love of science – and dropped down a mind-blowing (nearly) 1,100 feet (!!!!), give or take. 41-yea- old Ahmed Gabr took on to set the Guinness World Record in hopes of proving that humans could actually survive the conditions of deep-sea immersion. Wonder if the previous holder of the record, Nunes  Gomes of South Africa, will try to trump Mr. Gabr for the title. Scientific American was kind enough to put these numbers into perspective for us – the depths of Gabr’s dive would be the equivalent of more than three American football fields laid end to end. It took this guy no more than twelve minutes, TWELVE MINUTES, to reach this depth. Did he nab the record for fastest swimmer as well? That’s insane. Interestingly enough, the trip back up was a grueling 15 hours. I don’t even like flying for that long, let alone physically swimming! However, this is done to avoid decompression sickness amongst other physical ailments that can result from catapulting yourself out of the ocean. Most divers dive to an average depth of 130 feet, just to put things into perspective for you.  Gabr has been training for nearly four years for this feat, and has been a diving instructor for 17 years. Looks likes the next contender has their work cut out for them.