Why fish send red signals in the deep blue sea 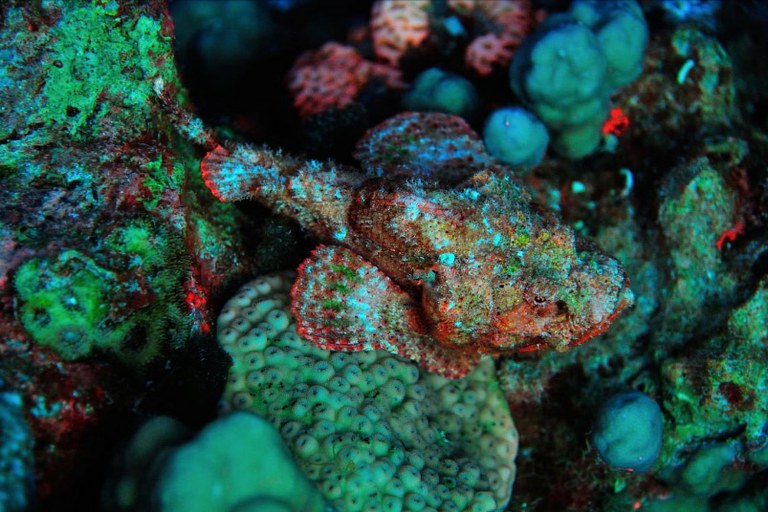 A red fluorescent pattern on the bodies of sit-and-wait hunters like this scorpion fish camouflages them against the coral reef. Photos: Nico K. Michiels/University of Tübingen.

The colorful world of the coral reef is fascinating – yet much of the color only comes up when flash photography is used. Water efficiently filters the yellow, orange and red tones out of sunlight. At depths below ten meters they are no longer perceptible. So under normal conditions, most denizens of the deep appear a uniform blueish-gray. But some fish can produce their own red light. They have fluorescent cells which absorb the blue light of the fish’s surroundings and emit it as red light. A study published in Frontiers in Ecology and Evolution now gives us an insight into the ecological importance of this mechanism.

Biologists at the University of Tübingen’s Institute of Evolution and Ecology headed by Professor Nico Michiels reviewed more than 600 species of fish for an ability to produce red fluorescence. A comparison of the ecology of these fish suggests three significant functions. Predators such as scorpion fish and flatfish emit fluorescent signals distributed irregularly over their bodies. “These ambush predators are difficult to see against a substrate containing many red fluorescent algae; the signals likely improve their camouflage,” the lead author, Dr. Nils Anthes, postulates.

In plankton-eating damselfish and gobies, the red fluorescence was dominant in the area around the eye. Nico Michiels says this is probably linked to feeding: “The red light can make the eyes of tiny, mostly transparent prey light up – thereby giving away their position.” This mechanism was previously completely unknown, but can be compared to the echolocation used by bats. The researchers are now focusing on it in further experiments.

Red fluorescence may well also play a role when such fish choose a mate. Fish species in which males and females have different coloring also frequently have red fluorescent fins. Fins are used to send important signals in many courtship rituals. The researchers believe that red fluorescence renews or amplifies signals which choosy females like, or which indicate that the male is a good genetic bet.

The study quite literally sheds new light on underwater communications. “The assumption until now was that red light was unimportant down there; our results show that is not true,” says Anthes. It seems that over the course of their evolution, fish have developed a whole box of tricks with which they can reproduce some of the colors missing in their environment. The Tübingen researchers now aim to find out how exactly the fish use those colors.

Red fluorescent rings around the eyes of plankton eaters like this goby give it a better chance of finding tiny transparent prey, researchers say. Photo: Nico K. Michiels/University of Tübingen.