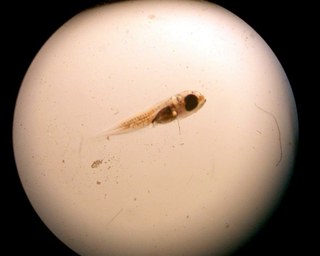 
Intuition suggests the longer a species’ egg or larvae spends in open ocean, the greater the distance they will travel and thus the wider the species’ geographic distribution will be.  However, numerous studies have failed to establish a relationship between the duration of a species’ open-water stage with its geographic coverage.  This mystery was recently solved by a team of researches at Dalhousie University (Canada).

The researchers then turned to another theory: ocean currents. According to Science Blog:

To test this idea, the team took on the challenge of modeling the paths of fish larvae during the open water period over the world’s tropical reefs. The authors used state of the art models of ocean currents and compiled a worldwide set of data on marine habitats where reef fish dwell. Simulated larvae were released from all possible habitats and allowed to drift for times equal to the duration of their open water periods. The simulation required 600 computer processors running continuously for six months. The results revealed that the majority of reef habitats worldwide are so interconnected that species can quickly spread their geographic distribution pushed by ocean currents. This lack of constraints to the geographic expansion of species provides one of the first explanations for why geographic extent bears no relationship with the duration of the open water period.

So contrary to intuition, the length of time a species spends in egg/larvae stage has no relationship to its geographic distribution because ocean currents serve as super-highways, speeding planktonic larvae great distances with such great efficiency as to make larvae stage period inconsequential.

I guess Nemo (and his turtle friends) were on to something!