Wild: ‘Plankton Boom’ Lures in Giant Jellyfish of The Deep to The British Coast 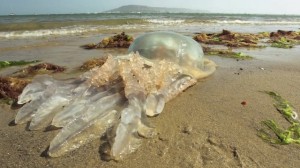 File this under your “pretty damn cool” tab for the day and take a look at these massive four-foot giant jellies spotted on the Southern Coast of Britain spotted over the past few weeks. Believed to be barrel jellyfish, experts hypothesize the Rhizostoma pulmo were enticed by a plume of plankton out of their normal habitat further out to sea. Arron Hendy, 38, was soaking up the sun at Seaford beach in Sussex with his wife and two children when he spotted the giant squishy blobby guy. He was shocked to say the least. While the sting of a barrel jellyfish is not believed to be harmful to humans, but it’s still not advised for you to handle them if you happen upon them. That’s certainly another experiment I wouldn’t want to be a guinea pig in. 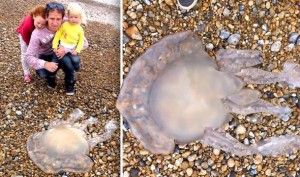