Will We Finally See Pseudanthias fucinus?

The Okeanos Explorer is on its way to Johnston Atoll to conduct another surveying expedition, and, with any luck, we might at long last get our first real glimpse at one of the ocean’s most elusive fishes—Pseudanthias fucinus. 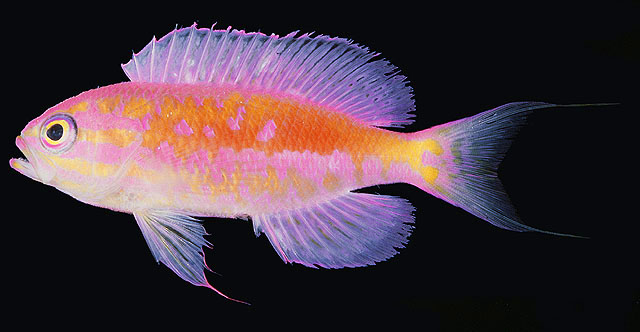 This poorly known anthias is exceedingly mysterious. Despite its beautiful yellow and violet colors, the first specimen wasn’t discovered until 1981, when a partially digested individual was pulled from the stomach of a jack in the Northwestern Hawaiian Islands. Just a year later, exploration using the research submersible Makali’i revealed that this was actually a fairly abundant species in steep, eroded limestone at depths from 130-270 meters. Populations were encountered in the main Hawaiian Islands, as well as nearby Johnston Atoll, but, to date, this species has yet to be encountered anywhere outside this region, likely indicating that this is a true endemic.

Fifteen specimens were successfully collected at the time, ultimately resulting in the scientific description published by Randall & Ralston in 1984. These authors noted several unusual morphological traits, which raised some challenging questions when it comes to where this peculiar fish fits in among its anthias brethren. For example, the number of lateral line scales (34-36) is far lower than what we see in most other Pseudanthias… the pectoral rays are uniquely unbranched… the anal fin has 9 rays (rather than the typical 7)… and the dorsal fin spines are all fairly short (rather than having the 3rd elongated). Even the color pattern is rather atypical, consisting of a series of irregular yellow and violet bands running horizontally along the body. This is alluded to in the scientific name—fucinus is a Latin word which refers to a purple dye called “orchil”. 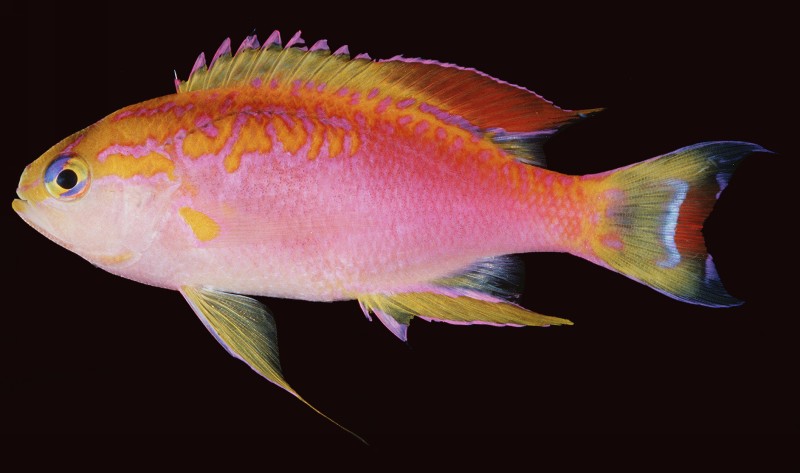 In the 33 years since it was described, there has been nothing else written of Pseudanthias fucinus. It is as obscure and enigmatic a reef fish as there is, and its considerable beauty and unique evolutionary importance render it all the more intriguing. For fans of anthias, it is unquestionably one of the true holy grails, and I, along with many other fish nerds, will be actively following along as Okeanos plumbs the depths of Johnston Atoll in the hopes that we will at long last get some small glimpse of it in life.