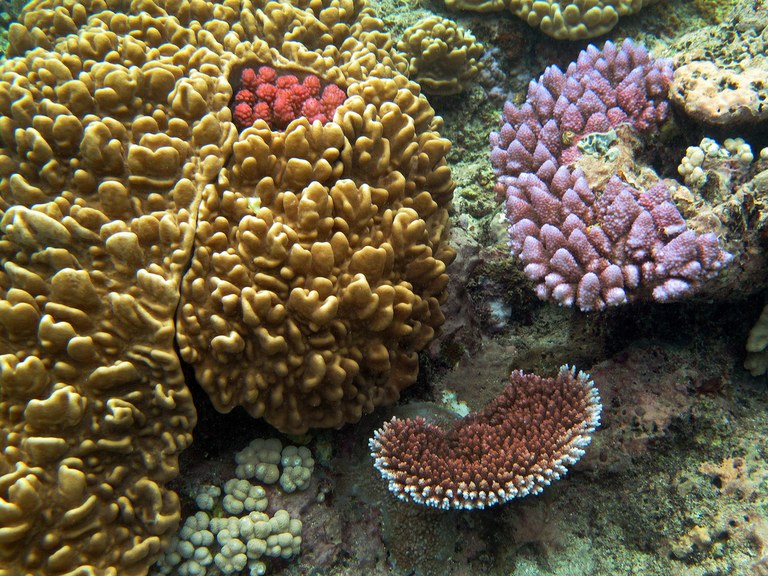 
Coral health and survival largely depend on the interaction between the host coral, a photosynthetic symbiont algae, and an associated community of micro-organisms. Hence, constructing a genetic dataset of the entire coral community, or so-called the coral holobiont, is essential for understanding their molecular interactions. Dr. Chuya Shinzato of the Marine Genomics Unit at the Okinawa Institute of Science and Technology (OIST) and his collaborators at Atmosphere and Ocean Research Institute (AORI), the University of Tokyo have successfully sequenced the genetic information ofthe Porites australiensis coral and its symbionts. The result of this research was published in the online journal PLOS ONE on January 16, 2014 (Japan time).

The researchers used a small Porites australiensis coral colony collected from waters off Sesoko Island in Motobu, Okinawa, Japan. Porites australiensis are reef-building corals consisting of hundreds of individual polyps cemented together by the calcium carbonate ‘skeletons’ they secrete. Because living corals grow on top of the skeletons of their dead predecessors, this coral has long been used in the geochemical study of past marine environments. In this study, the researchers used next-generation genetic sequencing to conduct transcriptome analysis of Porites australiens iscorals for marine biological research. While DNA sequencing targets a living organism’s whole genome, transcriptome sequencing is used to identify genes that are expressed in distinct cell populations.

Transcriptome analysis of the Porites australiensis coral holobiont by Shinzato and his colleagues resulted in the assembly of more than 70,000 genetic sequences from the different organisms. The researchers then compared this result with decoded genomic data of Acropora coral and Symbiodinium minutum, demonstrated by the OIST Marine Genomics Unit in 2011 and 2013 respectively, and successfully distinguished genetic information originating from the host coral and its symbiont algae Symbiodinum.

“The symbiotic relationship between the host coral and its symbionts is critical to the survival of coral reefs. Without obtaining genetic information of the whole coral community, understanding the molecular mechanism behind the host coral is impossible,” says Shinzato. “The complementarity in amino acid synthesis between the host coral and its symbiont had long been predicted, but our study provides an insight into coral-symbiont interactions at a genetic level for the first time,” Shinzato added, underlining the significance of this study.

Coral reefs, which only make up one percent of area on the entire planet, host nearly one-third of all described marine species. Despite its enormous ecological and economic importance, however, coral reefs increasingly face a range of environmental threats including ocean acidification and seawater temperature rise. When coral symbionts leave their host in a process called coral bleaching, the mutual relationship between the host coral and its symbionts is distrupted, eventually resulting in the death of the entire coral community. Understanding the symbiotic relationship within any coral holobiont deepens our understanding of the molecular mechanism of coral symbioses and their stress response. This study will pave the way for deeper understanding of the symbiotic relationship between these organisms, and thus contribute to preservation of coral reefs.

This study was supported by the Interdisciplinary Collaborative Research Program of the University of Tokyo’s Atmosphere and Ocean Research Institute, The Canon Foundation, and in part by KAKENHI (24241071 and 25660172).