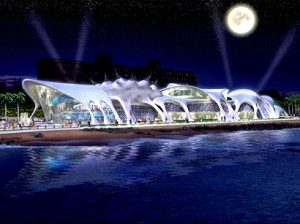 The Aquario Ceara in Fortaleza, Brazil is scheduled to open in 2015. In 2012 the U.S. Government lent over 105 Million Dollars to the Brazilian state of Ceara to help build the aquarium in its capital city of Fortaleza.  A. Zahner Co. and Colorado Design Firm International Concept Management, Inc. will start manufacturing the exterior of a new public aquarium this week, which is expected to become the world’s third largest by its completion in 2015. The Aquarium will have four floors with 25 large tanks with over 15 million liters of water. It is anticipated to have over 500 marine species, along with 3D cinemas and educational centers. “This is perhaps the most intricate building ever constructed in the Americas,” CEO Bill Zahner said in a release. “There will be nothing like it and it will be a treasure for the country of Brazil. We’re extremely proud to be involved with the project.” MORE