Seven months ago things looked pretty bleak for the Mangarahara cichlid Ptychochromis insolitus. The only habitat for this rare Madagascar fish species had been destroyed and the cichlid was down to its last 3 known individuals, all of which were males. In a last-ditch effort to save the species from extinction, conservationists at the London Zoo Aquarium and Berlin Zoo put out a worldwide call to private aquarium owners, fish collectors and hobbyists in hopes that someone, somewhere, would have a female fish waiting to find a mate. 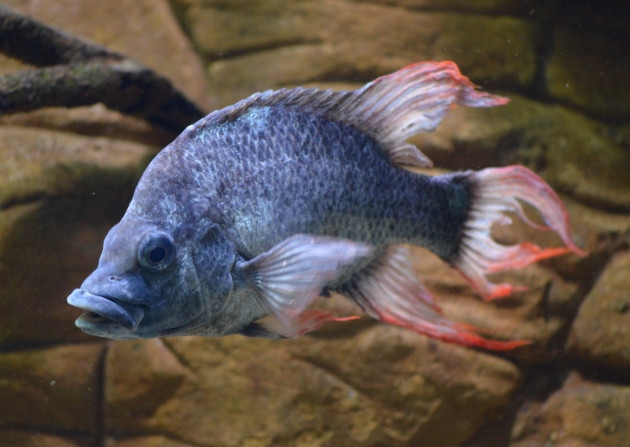 The response the ZSL London Zoo received was fantastic. Hundreds of private aquarium owners, fish collectors, and scientists got in touch with the Zoo’s Aquarium Curator, Brian Zimmerman, to offer up advice, support and suggestions. One of those to respond to the appeal was a farm and business owner in Madagascar, who recognized the fish as one he’d seen in a secluded north-Madagascan town.

An exploratory expedition was arranged so that, along with aquarists from Toronto Zoo in Canada, Brian Zimmerman and Kienan Parbles from ZSL London Zoo could head off to Madagascar to search for the Mangarahara cichlid. After initially losing hope and having no luck searching empty streams, the team found luck at a tiny village built on the edge of now disconnected tributary from the Mangarahara River.

With help from local villagers, areas of water were cordoned off using nets to mark the search areas, and the team finally found the first one of the last remaining Mangarahara cichlids in existence.

Brian Zimmerman said: “We are simply thrilled that we found the Mangarahara cichlid surviving in Madagascar.

“These cichlids have shown remarkable survival skills, and managed to find one of the very last remaining water sources to live in, but their numbers are tiny and the non-flowing water is not an ideal habitat for them. We’re now doing all we can to protect these remaining fish.”

The team moved 18 of the Mangarahara cichlids to a private aquaculture facility in Madagascar, where they will receive specialist care while conservation plans are made to bring the species back from the brink of extinction.