Would you stop touching me?! How one coral moves away from toxic neighbors 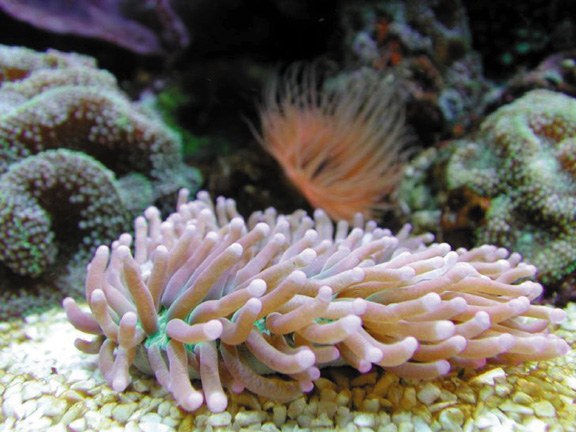 
Published this week in Coral Reefs, researchers Hoeksema and de Voogd report in their paper “On the run: free-living mushroom corals avoiding interaction with sponges” about this observation of Heliofungia fralinae, commonly known in our hobby as the plate coral.  While it is known that different corals will exhibit this trait between other corals, this is the first report of Heliofungia sp. coral movements caused by interaction with a non-coral invertebrate.

In this particular study, Hoeksema and Voogd wanted to understand confrontations between coral and non-coral invertebrates. Four different sponges were selected (in decreasing order of toxicity): Callyspongia biru, Amphimedon paraviridis, Niphates olemda, and Aaptos suberitoides.  Heliofungia fralinae, a free-living mushroom coral, was selected due to its ability to move across the reef surface and commonly reproduces asexually by budding which may result in dense aggregations that cover the substrate.

As can be seen in the photos below, a number of different H.fralinae were tied to different sponge fragments and monitored over time. It was observed that the mushroom corals actively moved away from the most toxic sponge, Callyspongia biru, but not so for the other three. It was noted that one specimen moved completely off of the test substrate.

a) Corals placed in contact with fragments of the sponge Callyspongia biru (start of experiment. b) Some corals are escaping, only number 1 remains fixed.

The authors noted that “The experiment demonstrated that mobility of mushroom corals helps them to flee from organisms that secrete secondary metabolites in competition for space.”

Incidentally, if you are interested in keeping Heliofungia spp. mushrooms, check out Julian Sprung’s article “Heliofungia: Husbandry Considerations And Taxonomical Relationships” in our April 2003 issue of Advanced Aquarist.