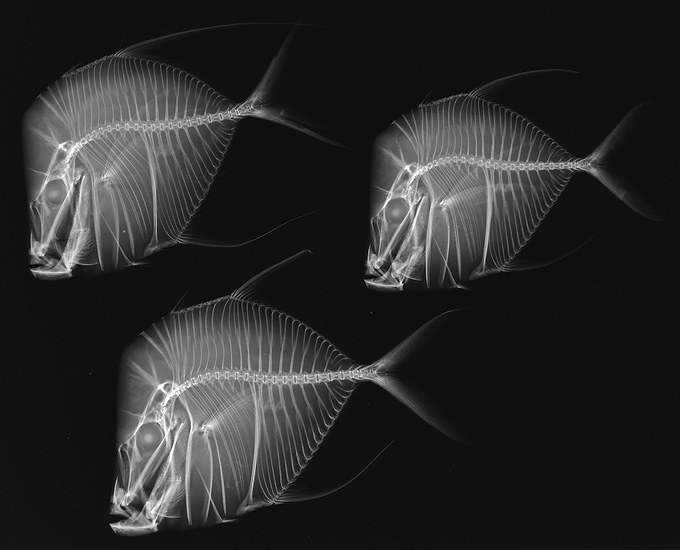 X-ray of a trio of Lookdown Fish (Selene vomer)

The Smithsonian’s National Collection of Fishes is the largest and most diverse collection of its kind, with an estimated four million individual fish specimens representing more than 70 percent of the world’s fish species. Encompassing males, females, juveniles, larvae, and even eggs, these specimens serve as a historical record of fish biodiversity and a working reference library for scientists and researchers around the world.

The care, maintenance, and loan of these collections are the responsibility of a handful of museum specialists, like Sandra Raredon, who has been at the Museum of Natural History for 25 years. For most of that time, radiology has also been part of her job responsibilities. Her striking black-and-white radiographs, or x-rays, of fish, stingrays, eels, and seahorses—“anything with a backbone,” she notes—reveal the complex bone structure in a level of detail reminiscent of fine engraving. At the same time, the images (99 percent of which are digital rather than film) provide a wealth of valuable information. “Radiographs allow the study of the skeleton of a fish without dissecting or in any other way altering the specimen,” says Lynne Parenti, curator of the exciting new SITES exhibition X-ray Vision: Fish Inside Out .

Forty dramatic digital prints are paired with illustrated labels that explore the scientific, environmental, and photographic relevance of each specimen. Interpretive panels describe how the study of fish skeletons, fin spines, and teeth helps scientists differentiate one species from another and examine fish anatomy and evolutionary development. Other panels document the process of scientific digital image preparation and explore the critical role of such collection data in understanding the long-term effects of climate and planetary change on diverse species.

The exhibition is accompanied by a stunning book titled Ichthyo: The Architecture of Fish (Chronicle Books, 2008), which combines more than 100 photographs with essays on scientific imagery, ichthyology and biodiversity, evolution and beauty, and the significance of the Smithsonian’s collections.