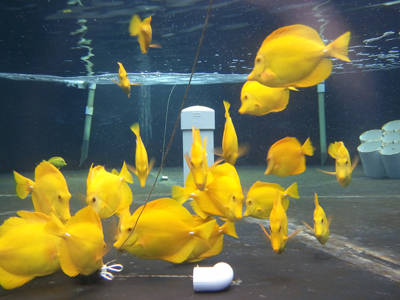 Captive-bred yellow tangs (Zebrasoma flavescens) may be coming to an aquarium near you. That’s the reality thanks to the efforts of the Oceanic Institute of Hawai‘i Pacific University (OI-PHU), who announced Friday that their groundbreaking research to breed yellow tangs has gotten a much needed infusion of cash…$75,000 to be exact. The funding comes from multiple sources, with the Hawaiʻi Community Foundation and the Hawaiʻi Tourism Authority making up the bulk of that with their $35,000 donation. The Sea World/Busch Gardens Conservation Fund contributed $8,000 and the Oceanic Institute provided $32,000 worth of in-kind support. It is said that the funding will support a year long project which has the goal to bring the current level of yellow tang breeding up to the point that the research team can have its first ever captive rearing of the species. As part of the announcement, the OI-HPU also highlighted the fact that research scientist Chatham K. Callan, Ph.D., has lead the way with yellow tang breakthroughs when he discovered “breeding techniques that allow them to culture viable eggs in significant quantities and successfully rear the resulting larvae through their critical first few weeks of life.” As part of this joyous announcement, Callan will be speaking to the Science Pub-Hawai‘i tomorrow, January 27th. If you would like to read more about this ambitious work, be sure to visit: “OI-HPU yellow tang research gets boost from multiple funders” Story via MARSHReef MORE: Yellow Tang Captive Breeding Program Gets Big Funding Boost