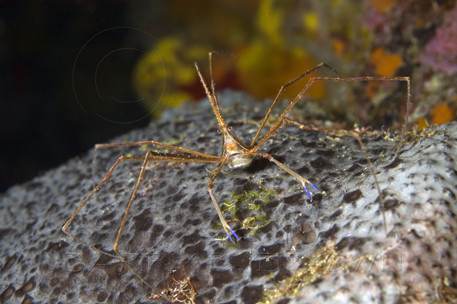 I have a wonderful little Yellowline Arrow Crab for you all today, sitting on top of a sponge without a care in the world. These crabs are know for those beautiful purple claws, big eyes and his super cool top-hat, such a fantastic creature….

The body of S. seticornis is triangular, and the rostrum is drawn out into a long point with serrate edges. The legs are also long and thin, up to 10 cm (3.9 in) across, and the animal’s carapace may be up to 6 cm (2.4 in) long. Coloration is variable in this species; the body may be golden, yellow or cream, marked with brown, black or iridescent-blue lines; the legs are reddish or yellow, and the claws are blue or violet.

S. seticornis is nocturnal and territorial. It eats small feather duster worms and other coral reef invertebrates. This crab is commonly kept in reef aquariums to control bristle worm populations.

S. seticornis is one of a number of different invertebrates that are found living in association with the sea anemone, Lebrunia danae. It is often found among the anemone’s pseudotentacles along with Pederson’s cleaning shrimp (Ancylomenes pedersoni) and the spotted cleaner shrimp (Periclimenes yucatanicus).