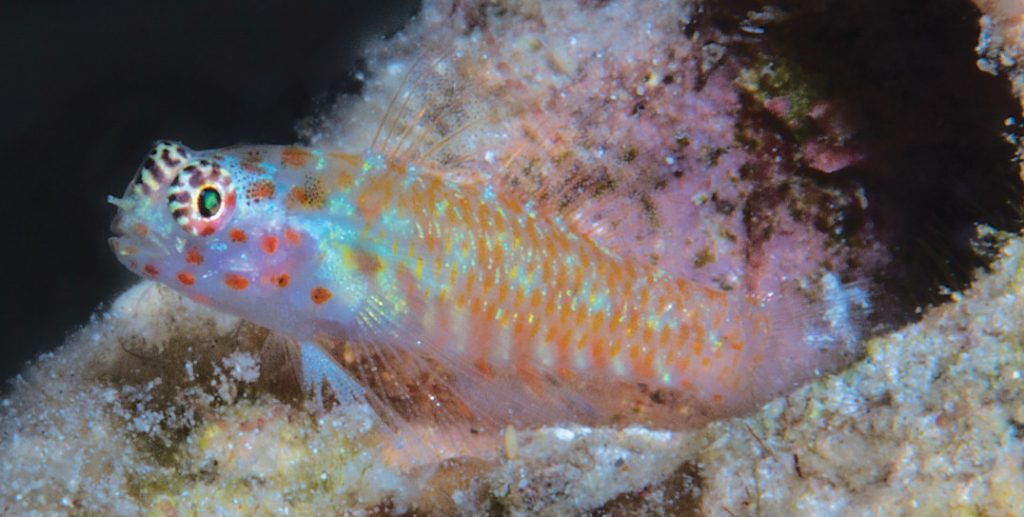 If you thought 112 species of dwarfgobies wasn’t quite enough, then allow me to introduce #113, the Paintedface Dwarfgoby (Eviota pictifacies), a rosy-cheeked fellow from shallow reefs of the Coral Triangle. Unlike so many of its drab relatives, this little goby is actually somewhat pleasing to the eye, with an attractive series of red spots adorning its head and a paler mottling present along the sides. It has, dare I say, some aquarium potential.

This diminutive species was, interestingly enough, discovered on a whale shark survey in Sumbawa, Indonesia by Mark Erdmann of Conservation International. Clearly Mark has a keen eye if he was able to spot a 15mm goby whilst searching for whale sharks. But this is far from his first new species, and Mark’s indefatigable fish-spotting skills have not gone unnoticed, as no less than eight species from the region are named in his honor. Included among these is both a dwarfgoby and pygmygoby, a dottyback, a tilefish, a fangblenny, a wrasse, a cardinalfish, and, for good measure, a catshark.

Aside from Sumbawa (the only known location mentioned in its description), additional images of specimens which appear to potentially be this fish have since surfaced from Romblon and Cebu in the Philippines, as well as Ishigaki in the Ryukyu Islands of Japan, which likely means that the Paintedface Dwarfgoby is widely distributed in the Coral Triangle. However, as tends to be the case with this insufferable genus, there is at least one other species which is virtually indistinguishable, the Headspot Dwarfgoby (Eviota melasma). Both gobies have red spots on the head and similar markings elsewhere along the body, but E. melasma can allegedly be distinguished thanks to its duller eye color and pelvic fin rays which are proportionally longer and more finger-like.