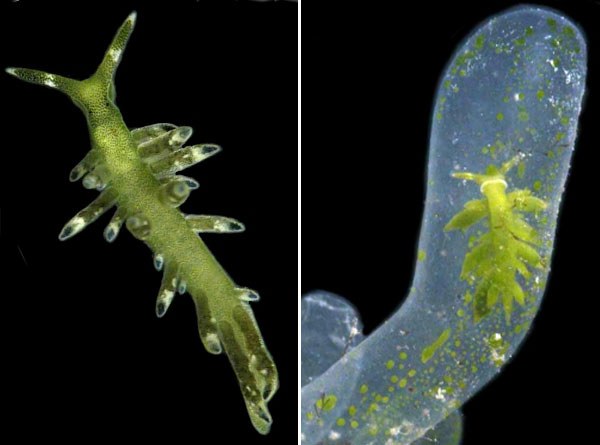 It’s little surprise that Ercolania kencolesi was only recently discovered.  This sea slug measures a mere 0.5 centimeters (0.2 inches) and mostly lives within the tubes of the sea algae Boergesenia forbesii.  The tiny green nudibranch bores a hole to enter the tubes.  Once inside, it dines on content within the algae’s cell.  The algae provides both a safe habitat and food source for E.kencolesi.

What’s more, this sea slug assimilates the chloroplasts from the algae into its own tissue, hence its green coloration.  As a result, E.kencolesi can derive energy from photosynthesis.  The algae is the gift that keeps on giving.

Other nudibranchs are also known to take on the attributes of what they eat.  The most well-known example amongst reefkeepers is Berghia verrucicornis (reclassified to Aeolidiella stephanieae).  These Aiptasia-eating sea slugs will harbor the stinging cells (nematocysts) of their prey in their body, helping protect the sea slug from their own predators.