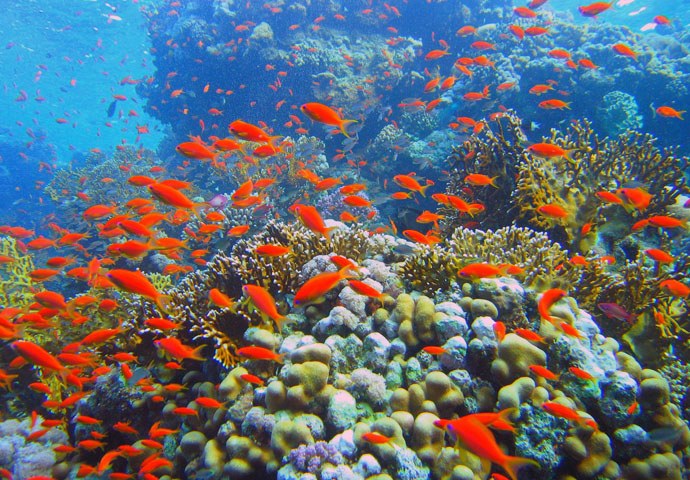 
Fish, crustaceans, gastropods, etc. make coral reefs bustling, noisy metropolis.  New acoustical analysis of coral reefs confirms a previous University of Essex study that concludes that the louder the reef, the healthier it is.  Conversely, when reefs are in decline, they go quiet.

The most alarming part of this finding is that research has shown that many reef animals including larval fish use sound as a queue to find their homes.  A dying, quiet reef thus will have difficulty recruiting new organisms to rebuild itself, setting off a downward spiral.

The silver lining in these research is that they help us better understand how to conserve and restore reefs.  We still know surprisingly little about what makes a reef community “tick” and how human activity impacts reef health.  We are just learning that noise and smells have profound effects on reef fish.  These discoveries will help us better understand how minimize our impact and manage natural reefs.

These studies also invite aquarists to reevaluate how noise (and smell) impact the welfare of the animals in our aquariums.  We’ve learned so much in the past three decades of modern reefkeeping, but there is still so much more to discover.

From the University of Essex

You can hear the coral reefs dying, experts say

You can hear the sound of former bustling coral reefs dying due to the impact of human activity, according to new research from the Universities of Essex and Exeter.

Coral reefs are amongst the noisiest environments on our planet and healthy reefs can be heard using underwater microphones from kilometres away.

However, scientists have found that coral reefs impacted by human activity, such as overfishing, are much quieter than protected reefs, which can have a big impact on the fish and invertebrates which rely on the reefs for survival.

Led by Dr Julius Piercy, from the University of Essex, the study involved taking acoustic recordings of coral reefs with different levels of protection around islands in the Philippines. The research found that the noise produced by the few remaining resident fish and crustaceans on unprotected reefs was only one third of the sound produced at bustling, healthy reef communities.

This is particularly important to the larval stages of reef fish and invertebrates, which spend the first few days of their life away from reefs and use sound as an orientation cue to find their way back. With less sound being produced at impacted reefs, the distance over which larvae can detect habitat is ten times less, impacting on the replenishment of future generations needed to build up and maintain healthy population levels.

“In an environment where underwater noise plays such an important role in the population dynamics of coral reefs, it is alarming to find such a large effect of human impact on the natural acoustic environment,” explained Dr Piercy. “This puts reef sound in the spotlight for the people who manage coral reef ecosystems on two counts. Firstly, that they might need to consider reef sound as an integral part of the design of marine protected area networks to ensure that there is sufficient recruitment of larvae within and between reserves and neighbouring reefs. Secondly, this study shows sound can be useful in monitoring the health of coral reefs.”

With growing evidence demonstrating the direct impacts of man-made noise on aquatic life, these findings highlight additional indirect human impacts – such as overfishing and landscape development – on natural underwater sounds.

Dr Steve Simpson, from Biosciences at the University of Exeter, added: “Taking sound recordings is a cheap, fast and objective way to get a broad idea of whether a reef is in a good condition or not. While it cannot replace detailed visual surveys conducted by snorkelers or divers, it gives a good account of the cryptic and nocturnal species missed in visual census, and quickly provides a general picture of the state of coral reefs without requiring time-consuming surveys and extensive training.”

The researchers also found that reef sounds can be detected further away than predicted, increasing previous estimates of the likely detection zone for recruiting larvae and increasing the potential importance of reef sound in attracting new fish and crustaceans to coral reefs.

The study highlights the need to further characterise reef soundscapes and identify acoustic cues that larvae tune into when seeking a suitable home. Dr Simpson said: “We still know very little about what sounds these animals are listening to and it is likely to be very different between species. Combined with recent findings that fish dislike the smell of impacted reefs (another homing cue used by the larvae), there is a real need to understand how human impacts can indirectly affect the success of future generations of reef organisms.”