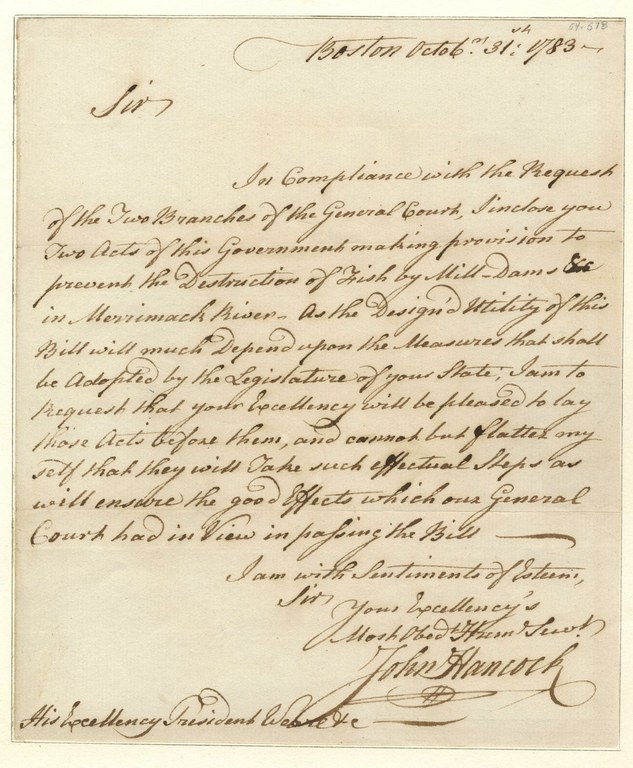 The eBay auction lists a letter by John Hancock, then Massachusetts Governor, concerning a provision to prevent the destruction of a river habitat for spawning fish threatened by the construction of a dam on the Merrimack River. The auction listing states:

John Hancock transmits an early river conservation measure concerning anadromous fish (fish that travel from the ocean up rivers to spawn) to his New Hampshire counterpart Meshech Weare. The law, An Act to Regulate the Catching of Salmon, Shad and Alewives, and to Remove and Prevent Obstructions in Merrimack River, and in the Other Rivers and Streams Running into the Same, within this Commonwealth, and for the Repealing Several Acts Heretofore Made for that Purpose recognizes the great benefits of maintaining common resources and retaining fish stocks for the benefit of residents of both states.

Just how early is this document?  The Constitution of the United States of America had yet been written!  The new nation was still operating under the Articles of Confederation with each State operating like independent (but cooperating) nations.  The document was dated October 31, 1783.  It was less than two months earlier on September 3, 1783 that the United States signed the Treaty of Paris with Great Britain, effectively ending the American Revolutionary War. Yep; very early in American history indeed!

Even during the earliest years of American history when a formal government had yet been established, John Hancock – a founding father, the President of the Continental Congress, and signer of the Declaration of Independence – thought it was important for government to conserve habitats for our natural resources.

If I had $13,500 laying around, this letter would be framed behind museum glass hanging in my home office.

For the record, Advanced Aquarist is not associated with the eBay seller.  We are not experts in historical documents and can neither guarantee the authenticity of this document nor whether it is valued properly.