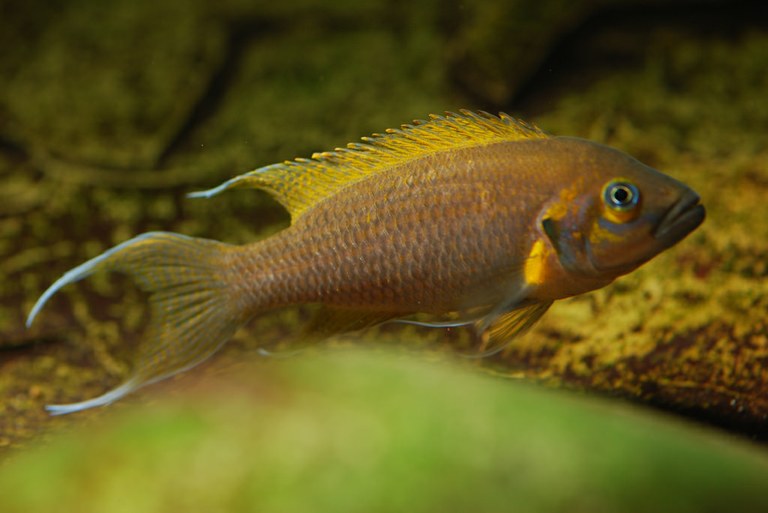 
We (humans) are still in the dark about the many the ways fish communicate with each other.  We know fish can communicate with visual queues (e.g. courtship rituals, flaring of fins and gill flaps to show aggression, etc.)  We know some fish, like certain damselfish, grunts, and blue cheek angelfish, can make measurable sounds presumably to communicate, though the exact purposes of many of these sounds remain unclear.  We know certain smells, such as Chondroitin, are known to scare other fish.

Now a new study published in Behavioral Ecology and Sociobiology has discovered that the Lake Tanganyika cichlid, Neolamprologus pulcher, use the smell of their urine to communicate aggression.

The experiment and results:

During staged encounters, we allowed either visual and chemical contact between two contestants or visual contact only. As chemical information in this species is most likely transferred via urine, we measured urination patterns using dye injections. Furthermore, we recorded aggressive and submissive behaviours of both contestants in response to the experimental treatment. Fish that had only visual contact with each other significantly increased their urination frequency and showed more aggressive displays compared to fish with both visual and chemical contact. Furthermore, appropriate agonistic responses appear to be dependent on available chemical information.

When the researchers put two daffodil cichlids in adjacent tanks, the two fishes would rush towards each other in aggressive displays, urinating as they charged.  And they kept right on peeing because they couldn’t smell the other’s urine.  On the other hand, cichlids who were able to smell the other fish exhibited less visual aggressive displays and also didn’t piss like racehorses. These findings suggest the use of urine as a mode of social communication.

Fish put next to each other in adjacent tanks often appear hyper-aggressive towards their neighbors.  This study may explain what we’re seeing.