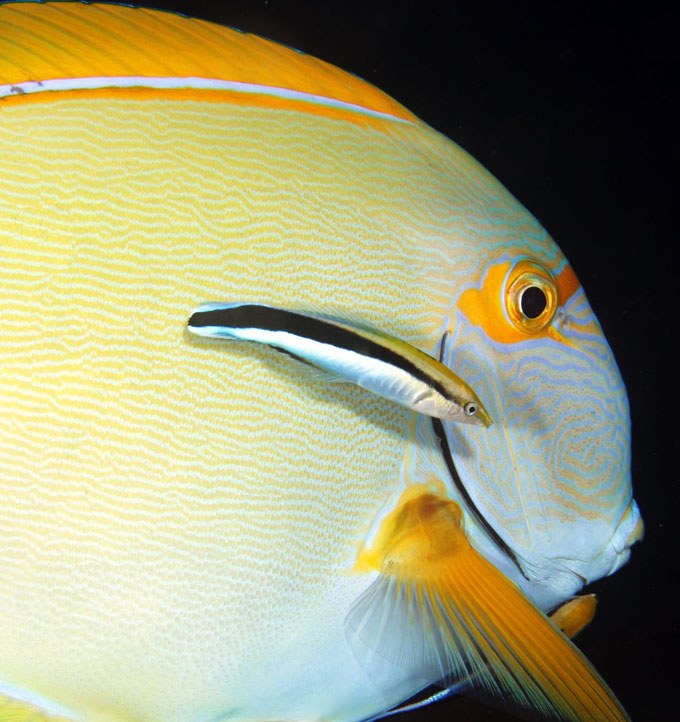 
When fish are in need of cleaning, they head over to cleaning stations where cleaner wrasses pick off parasites from their bodies. During the cleaning process, sometimes these wrasses will also straddle the backs of their “clients” and rub them with their pectoral and pelvic fins. Why wrasses perform this action has remained a mystery.

Research published yesterday in Nature Communications by Marta Soares and others as shown for the first time that this fin “massaging”, at least in surgeonfishes, reduces the stress hormone cortisole.

A mechanical moving model of a cleaner fish.

In order to discount factors such as parasite removal and social interactions on the lowering of cortisole levels in the fish (in this case the striated surgeonfish, Ctenochaetus striatus), the researchers used a model cleaner wrasse Labroides dimidiatus (seen at right) for their experiments. In one scenario the model moved back and forth and massaged its client with a soft-bristled brush on its underside. In the other scenario, the model remained stationary.

Each fish was exposed to one of these two scenarios for two hours a day for ten days. Blood samples were then taken on the eleventh day and tested for cortisole levels.

A second part to this experiment was to stress the fish by placing them into a bucket and then again measuring their cortisole levels. Again, all fish that were subjected to the moving model had lower levels in their blood.

Soares concludes: “Our results show that physical contact alone, without a social aspect, is enough to produce fitness-enhancing benefits, a situation so far only demonstrated in humans.”