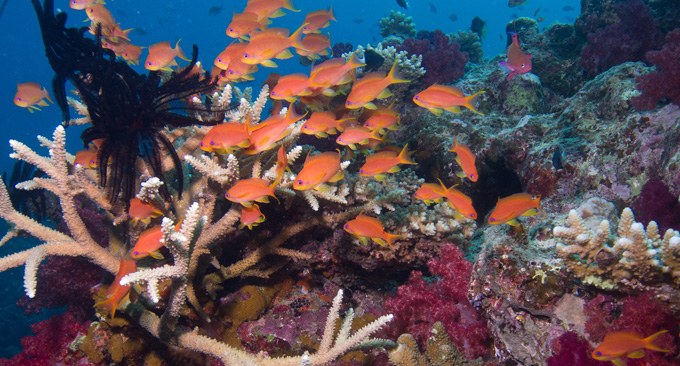 
From the University of Auckland’s Institute of Marine Science:

Safety in numbers: fish stick together by communicating

Scientists at the University of Auckland have proved that fish communicate to keep safe from predators in the same way animals such as chimpanzees and elephants do.

The research, from the University’s Institute of Marine Science, led by Master’s student Lucy van Oosterom and including Dr Craig Radford and Professors John Montgomery and Andrew Jeffs, is the first direct evidence that fish communicate to maintain group cohesion.

While scientists have known fish send messages to each other for mating purposes or to defend territory, this is the first time research has proved they also use contact calls to keep together.

The research team used captive wild Bigeyes (Pempheris adspersa) in the study, a species commonly found along New Zealand’s north-east coast. Bigeyes are generally nocturnal, retreating to caves during the day and foraging at night in loosely-knit shoals.

Previous work by Dr Radford has shown Bigeyes have a distinctive ‘pop’ call with an estimated maximum range of 31.6m. This vocal behaviour, coupled with relatively sensitive hearing organs, led researchers to assume Bigeyes communicated in groups but up to now the evidence has been anecdotal.

Using underwater hydrophones, a GoPro camera and an MP3 player, the researchers collected almost 100 fish from the Leigh coast north of Auckland and put them in saltwater tanks at Leigh Marine Laboratory.

In experiments carried out over five months, they played two types of sound to the captive fish: one of the normal reef environment at Leigh where the fish live, and another recording of Bigeye vocalisations.

When the sound recordings were played, the Bigeyes increased their own calling rates by more than five times in order to maintain contact over and above the background noise. They also swam closer together. When there were no sound, the fish swam further apart.

“This study means that fish are now the oldest vertebrate group in which this behaviour has been observed and that has interesting implications for our understanding of evolutionary behaviour among vertebrates,” Ms van Oosterom says.

You can read the study in Nature Scientific Reports.