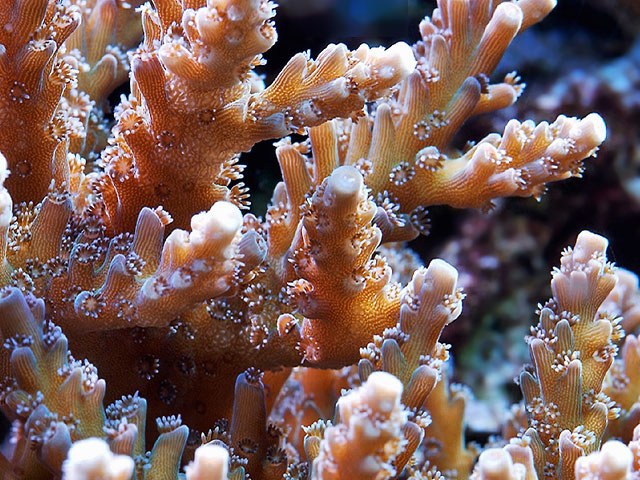 Multiple partners not the only way for corals to stay cool

Recent experiments conducted at the Australian Institute of Marine Science (AIMS) produced striking results, showing for the first time that corals hosting a single type of “zooxanthellae” can have different levels of thermal tolerance – a feature that was only known previously for corals with a mix of zooxanthellae.

Zooxanthellae are algal cells that live within the tissue of living coral and provide the coral host with energy; the relationship is crucial for the coral’s survival. Rising ocean temperatures can lead to the loss of zooxanthellae from the coral host, as a consequence the coral loses its tissue colour and its primary source of energy, a process known as ‘coral bleaching’. Globally, coral bleaching has led to significant loss of coral, and with rising ocean temperatures, poses a major threat to coral reefs.

PhD student, Ms Emily Howells from the Australian Research Council Centre of Excellence for Coral Reef Studies (CoECRS) at James Cook University, Townsville, together with scientists from AIMS and CoECRS, collected two populations of a single type of zooxanthellae (known as C1) from two locations on the Great Barrier Reef. The population collected from Magnetic Island near Townsville experiences average ocean temperatures 2°C higher than the population collected from the Whitsunday Islands. In experiments at AIMS, young corals were treated with one or other of the two different populations of zooxanthellae, and exposed to elevated water temperatures, as might occur during bleaching events.

Madeleine van Oppen, ARC Future Fellow at AIMS, says the research results will likely have a major impact on the field, as until now corals associating with the same type of zooxanthellae have been viewed as physiologically similar, irrespective of their geographical location.

“Our research suggests that populations of a single type of zooxanthellae have adapted to local conditions as can be seen from the remarkably different results of the two populations used in this study. If zooxanthellae populations are able to further adapt to increases in temperature at the pace at which oceans warm, they may assist corals to increase their thermal tolerance and survive into the future.” says Emily Howells.

“However, we do not yet know how fast zooxanthellae can adapt, highlighting an important area of future research”, says Bette Willis, Professor from the CoECRS at James Cook University.

Research at AIMS is therefore currently assessing whether zooxanthellae can continue to adapt to increasing temperatures and at what rate. This work in progress will provide insights into the capacity of zooxanthellae to adapt to future climate change.