Zooxanthellae in the open ocean! 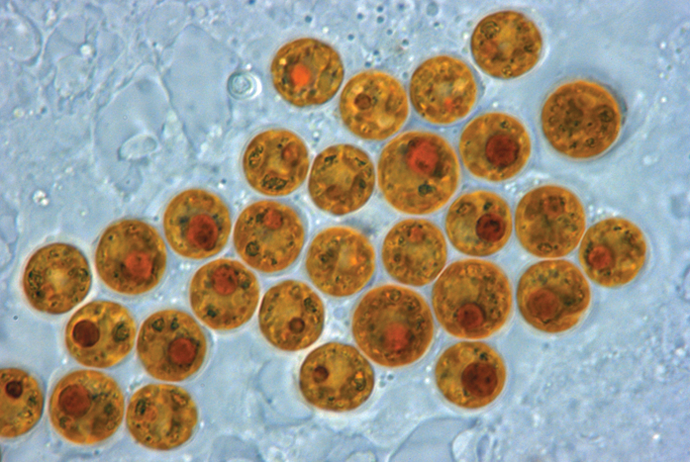 
Symbiodinium is a unicellular alga that plays a major role in coral reefs by forming symbiotic partnerships with invertebrates, providing them with the ability to photosynthesize. For the first time, it has now been discovered in the open ocean, in various oceanic regions far from coral reefs.

A team from the ‘Adaptation et Diversité en Milieu Marin’ laboratory (CNRS/UPMC) identified Symbiodinium in several samples collected during the Tara Oceans expedition (2009-2013). According to their study in The ISME Journal this alga lives in symbiosis within a unicellular organism, a ciliate, which measures around a hundred micrometers and makes a calcareous shell.  This partnership is probably based on mutual exchange of food, enabling them to survive in extremely nutrient-poor waters.

The researchers still have to determine whether these new types of Symbiodinium are able to live within coral reefs. If they are, they could play a role in repopulating these threatened ecosystems.

Confocal microscope image showing the inside of the ciliate Tiarina, containing between 10 and 20 cells of the microalga Symbiodinium. They are visible with their red chloroplasts and blue nuclei. The ciliate Tiarina (the host) whose nucleus is visible in light blue, has cilia on its surface, which enables it to swim. Scale bar: 20 micrometers.